Tommy Gillies was born in Glasgow in 1919, the youngest of four children. Leaving school in 1936, he worked for a short period in the insurance industry. With war imminent however,  Tommy joined the Highland Light Infantry.

Early in 1940 Tommy found himself manning a Lewis Gun position on the end of Southend Pier in Essex – a long way from Glasgow. He was then detailed to man an Anti-Aircraft gun on the merchant ship Halland, a ship employed on North Sea convoy duties. Tommy was manning his position on the stern of the Halland on 15 September 1940 when she was subjected to heavy air attack. The ship took a direct hit and sank very quickly; Tommy and his number 2 on the gun were the only survivors from a crew of 39. After many hours clinging to a life raft the two survivors were recovered and taken ashore.

Once his recovery was complete Tommy returned to home defence duties with the Highland Light Infantry. In search of a new challenge, he applied to the RAF, which led to his entry to the newly-formed Glider Pilot Regiment. Despite the severe training regime, he got through the GPR Depot at Tilshead and began flying training.

Tommy started his flying career at 16 Elementary Flying Training School (EFTS) at Burnaston near Derby. After completing his initial flight training, Tommy moved on to Croughton for conversion to Hotspur gliders. In October 1942 Tommy moved on to RAF Brize Norton where underwent Heavy Glider conversion onto the Horsa Assault Glider. On completion of Horsa conversion he was posted to 3 Squadron GPR, at Hurn Airport near Bournemouth.

In February 1943 Tommy volunteered to take part in experimental flights on the Horsa to gain more experience and flying hours, which were not without incident. On one night sortie, his tow rope broke in the blackout over Bournemouth, with ten other men onboard. Fortunately he was able to land on a road (which led down a cul-de-sac) in a residential area, the wingtips clipping houses as he landed but miraculously there were no casualties.

In April 1943, 3 Sqn GPR sailed to Oran in North Africa. In company with 2 Sqn and RHQ GPR they were moved by convoy via Scotland. On arrival Tommy joined others in a concentrated flying training programme that was designed to convert the majority of GPR pilots onto the American CG4A WACO glider. This would be the aircraft they would fly for Operation LADBROKE – the Airborne landing on Sicily.

In preparation for the invasion the Airlanding component of 1st British Airborne Division flew across the Atlas Mountains from Algeria to Tunisia. The ‘D’ day for Op LADBROKE had been set for the night of 9 July 1943. That night Tommy took off in a WACO (Chalk Number 130) with an American Glider pilot as his 2nd pilot, Flight Officer Browning had volunteered along with approximately thirty other US pilots to make up the crews required to fly the Airlanding Brigade. Flying into high winds and flak the USAAF tugs cast the majority of the British gliders off too early. Amid poor night conditions over 300 Airlanding Brigade troops and glider pilots were tragically drowned. Tommy was a victim of the debacle, but survived once more with only minor wounds to return to Malta, and on to Tunisia.

During his time in Tunisia Tommy spent time training in the desert with ‘Popski’s Private Army’. The invasion of Italy was imminent and 3 Sqn embarked on the cruiser Aurora along with Popski’s men and ‘the phantoms’. Luckily the Italians surrendered and the Royal Navy entered Taranto unopposed.

Tommy returned to Tunisia after the landings, where 3 Squadron was attached to 2nd Independent Parachute Brigade and renamed 1st Independent Squadron GPR which remained in the Mediterranean. Training at the US Airborne Training Centre in French Morocco was followed by a move to Comiso in Sicily. The Squadron built up a high level of hours on both WACO and Horsa as they moved around the Mediterranean. Tommy however found himself employed in the infantry role with 2nd Independent Parachute Brigade at Monte Cassino.

Tommy flew with the Independent Squadron as part of Operation DRAGOON. On 15 August 1944 the 2nd Independent Parachute Brigade took off with forty-five Horsa gliders in support carrying all of its heavy equipment. As the Airborne force crossed the coast the pathfinder force signalled that the Landing Zones were obscured by mist. The landing was aborted and the glider/tug combinations turned back to Italy. Shortly after landing a further signal indicated that the mist had cleared. The operation was back on. Tommy flew with Dick Clarke, after a combined total of 7 hours flying they approached Le Muy and shot a good approach to the LZ. In spite of losing both wings to anti-glider poles they made a good landing and delivered their load intact.

By the autumn of 1944 Tommy was back in Sicily and preparing for another glider-borne operation. This time he would fly a WACO and the destination would be Greece. Tommy and Dick Clarke delivered a 3-inch mortar and its crew to Megara about ten miles outside Athens. Tommy had many happy times in Greece and that was to be his final operation.

In April 1945 Tommy returned to England where he was offered the option of a commission in the Glider Pilot Regiment. After considering the number of ditchings, sinkings, wounds and crashes he had accumulated he elected to return to the much safer insurance industry in Glasgow and London.

Tommy Gillies was born in Glasgow in 1919, the youngest of four children. 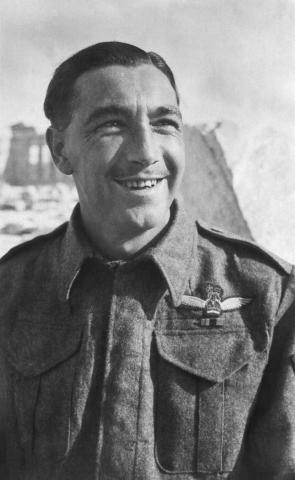