Tom Duffy was born in Jarrow in 1921 and enlisted in the Durham Light Infantry in 1941 for the duration of the war. He subsequently volunteered for service with the Parachute Regiment and underwent parachute training at Ringway on Course 56 between the 17 March and 1 April 1943. He was onboard the ill-fated HMS Abdiel sunk offshore of Taranto harbour on 10 September 1943 during the Italian invasion, but survived and saw active service in Italy. He was later part of the 2nd Parachute Brigade actions in Southern France and Greece.

By 1945 Tom was a Company Sergeant Major, and he deferred his demobilisation to serve with the 2nd Parachute Brigade in Palestine. On 25 March 1946 he was promoted to Regimental Sergeant Major of 6th Battalion The Parachute Regiment, becoming the youngest RSM in the British Army at 24 years of age. During this tour he decided to become a regular soldier and was awarded a Commander-in-Chief's commendation.

On return from Palestine and before proceeding to Germany the 4th & 6th Battalions were amalgamated. Tom Duffy continued as Regimental Sergeant Major of the 4th/6th Battalion until the formation of the 16 Independent Parachute Brigade when the Battalion re­numbered to become the present 1st Battalion, The Parachute Regiment.

As Regimental Sergeant Major of the 1st Battalion he served in Germany, Egypt, Jordan and Cyprus and was awarded the MBE in 1952. In 1956 he was posted from Cyprus to the Parachute Regiment and Airborne Forces Depot. He served there as Regimental Sergeant Major until 1963, attaining a record of 17 years continuous service as an RSM in the Parachute Regiment and gaining a place in British Military History that is unlikely to be equalled.

In 1963 Tom Duffey was commissioned and posted as MTO of the 3rd Battalion, The Parachute Regiment, serving in Malaya, Bahrain, Radfan and British Guyana. In Radfan he was awarded his second Commander-in-Chief's commendation. 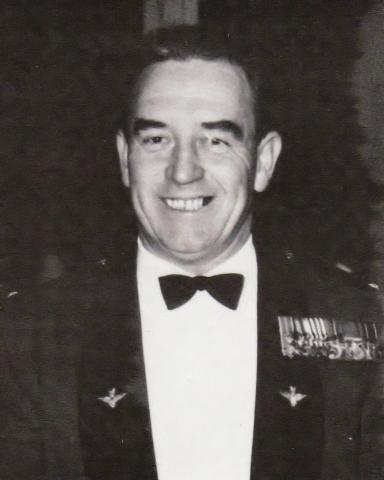