He was granted a commission in the Royal Artillery (Territorial Army) with the Oxfordshire Yeomanry in 1939 and promoted to War Substantive Lt in January 1941.

Lt Winser volunteered for airborne forces and transferred to The Parachute Regiment in August 1944.

He qualified as a military parachutist on course 132 at RAF Ringway, which ran from 4 to 14 September 1944, and subsequently served with the 13th (Lancs) Parachute Battalion.

During the heavy winter fighting in 1944-5 in the Ardennes Battle of the Bulge, the 13th Battalion was tasked to capture the village of Bure.

Lt Winser was killed during the Battle of Bure on 3 January 1945 and is now buried at Hotton War Cemetery, Belgium.

Compiled with assistance from Peter Suffolk 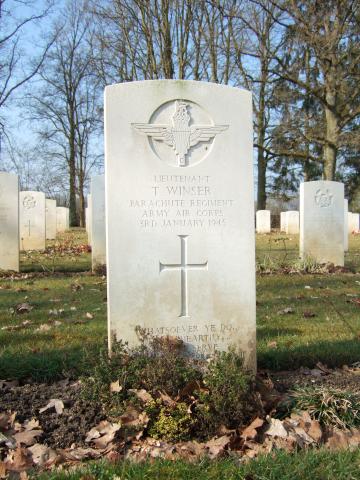