Thomas ‘Darkie’ Waters was born on 12 October 1914. He was raised in Denaby, South Yorkshire, and worked as a coalminer before joining the King's Own Yorkshire Light Infantry on 3 July 1935. After basic training, he was posted to Gibraltar on 7 February 1936, and remained there until December 1936, when his unit was moved to India. In April 1937, he served in Burma where, promoted to Lance-Corporal on 1 October 1939, he was involved in the training of the Burmese Militia.

In May 1941 he was transferred to the special forces and joined The Bush Warfare School at Maymo, the summer capital of Burma. The School, commanded by Major ‘Mad Mike’ Calvert, who as a Brigadier was later to become a famous leader of the Chindits, trained the British soldiers who were to support the Chinese in the guerrilla war they were waging against the Japanese.

In 1942, the Japanese invaded Burma and the British were forced to fall back into India. Some of the members of The Bush Warfare School went with them, but others, Waters included, moved into Yunnan, China, where they continued to support the guerrillas. Waters was engaged in special operations here until he was flown to India on 6 October 1942, where he remained until April 1943 when he returned to Britain. In July he was transferred into the Royal Corps of Signals as a Sergeant, but at his own request he was reduced in rank to Corporal. He qualified as a wireless and line operator and was posted to the 6th Airborne Divisional Signals.

Waters was attached to 5th Parachute Brigade Headquarters during the invasion of Normandy, and for his actions on D-Day he was awarded the Military Medal.

"At about 1300 hours on D Day, we heard the sound of Lord Lovat’s piper. In the meantime, my party had started to lay the line from Brigade Headquarters across the two bridges. They had all been wounded from machine gunfire from the Chateau de Benouville to the south west of the canal bridge. Corporal Tom Waters, who with his wireless detachment was in reserve, on his own initiative threw three smoke grenades and got covering fire from one of our Bren guns. He then proceeded to rescue the wounded before, under intense enemy fire, taking the line across the bridges to 7th Parachute Battalion, which was resisting powerful counter attacks in Le Port. He then spent all day maintaining it."

For conspicuous gallantry and coolness under enemy fire and devotion to duty during airborne operations in the Ranville area on 6th/7th June 1944. On 6th June Corporal Waters volunteered to bring in a wounded comrade from an exposed position, in the face of accurate enemy sniping which had already caused casualties he coolly went forward and brought in the wounded man. He then continued his duty of laying a signal line along an exposed route under constant enemy sniping and small arms fire. When this line was cut by enemy fire Corporal Waters again went out under fire and repaired it. [On several] occasions this NCO went out voluntarily and repaired communications in full view of the enemy. By his gallantry and complete disregard of personal danger Corporal Waters maintained communications between Brigade Headquarters and a Battalion holding a vital position.

On 25 June, Corporal Waters told Captain Radmore that he suspected that the Germans were sending out men to cut their telephone lines.

"He [Waters] lay up and later I met him on the road where he appeared wearing jackboots and carrying a German helmet. He had seen the German creep out of the ditch with a pair of wire cutters and had shot him."

Waters was seriously injured during a training accident later in the Normandy campaign. A Sergeant had pulled a pin from a live grenade and, realising this, Waters immediately threw a waste paper basket over it in an attempt to dampen the explosion. He was caught in the subsequent blast and lost his right eye, sustained damage to his right wrist, and also suffered a serious head wound which necessitated a metal plate being inserted into his skull. He returned to the UK in September 1944, and was discharged from military service on 10 May 1945, with exemplary character after 9 years and 312 days service as a regular soldier.

Thomas Waters was determined to carry on with his life and went to great lengths to find a job, eventually becoming a postman in Conisbrough, but he was tragically killed whilst crossing a road during a postal round on the 30 September 1955.

"I had a wonderful childhood. We were poor but my father taught me to ride a bike, roller skate and I spent happy hours helping him deliver the coupons. My mother worked as a nurse. I was nine years old when he was killed and had no idea how brave he was or how much he suffered often having to return to hospital when I was growing up. It was only when I became an adult and my mother told me about him."

The actions of Corporal Thomas Waters on D-Day are immortalised in a painting by Peter Archer, which depicts him running across Pegasus Bridge, laying a field telephone line under fire.

My thanks to Sylvia Atkinson for this information.

By Bob Hilton with information provided by Sylvia Atkinson 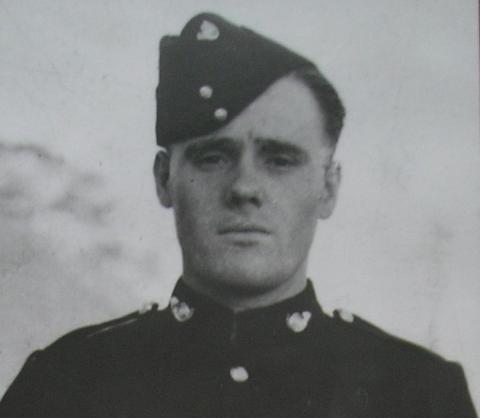