Corporal Thomas William Smith is my grandfather, born on 13 April 1915 in Hartlepool. His father Joseph Smith was a marine steward and his mother was Edith Mary Francis Buttle of Hartlepool. The Smith family have been sailors and shipbuilders in the Hartlepool area for many generations and Thomas was the first of our family not to follow his father and go to sea.

In 1940 he joined The Green Howards Regiment and quickly rose to the rank of acting sergeant.  In December 1943 he volunteered as an individual recruit for The Parachute Regiment where he was promoted to regain his prior rank. Thomas was part of 9 Platoon, A Company, 9th (Essex) Parachute Battalion of 6th Airborne Division.

He took part in the D-Day landings to Normandy, during Op Overlord after passing Parachute Training Course 99 at Ringway, in early February 1944. Thomas was dropped from a Dakota of 512 Squadron in the early hours of 6 June 1944 and took part in Operation Tonga. He was listed as killed in action on D-Day, and may have been part of the attack on the Merville Battery. He is remembered on Panel 18 Column 1 of the Bayeux Memorial near Bayeux War Cemetery, Normandy, France.

He is sadly missed by his family in Australia and his only son Howard. Today, Thomas is survived by his son, three grandchildren and three great grandchildren two in Australia and one in Japan. It has taken me seven years to find out what happened to my grandfather on the sixth of June. My grandmother searched all her life for Thomas and her letter to the people of Ranville, dated 1944, can still be seen today on the wall in the Pegasus Cafe. Should you pass this way please raise a glass and say a few kind words for all those who never made it home again.

Profile photo whilst serving with the Green Howards 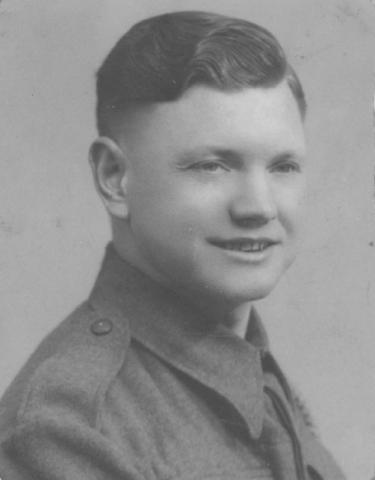