Thomas William Huntbach (Tony) joined the 70th (Young Soldiers) Battalion The Kings Regiment in November 1942 and served with them until June 1943.

In June 1943 he was posted to the 8th Battalion The Kings Regiment (Liverpool) and landed on D-Day H Hour + 20 minutes, 6 June 1944, at JUNO Beach with The Canadian Scottish Regiment in the second wave. They were a Beach Group and tasked with security of the beach, unloading of supplies and supporting the Canadian Forces as they advanced inland.

At the end of June they were disbanded and Tony volunteered for duty with Airborne Forces. He was posted to the 1st Battalion The Royal Ulster Rifles whilst they were resting out of the line near Pegasus Bridge. He saw action in the bridgehead area and took part in the break-out, ‘Operation Paddle’, and the advance to Honfleur in August.

He also saw action in the Ardennes campaign in January 1945 and was involved in conducting relatives round the town of Bande where some of the townspeople were massacred by German SS troops.

In 1945 Tony was promoted to Lance Corporal, but by the time of ‘Operation Varsity’ he was a War Substantive Corporal. On 24 March 1945 his platoon was tasked with the capture by Coup De Main of the Bridge over the River Ijssel near Hamminkeln Railway Station. His glider was hit by anti-aircraft fire on the fly-in to their landing zone and he was slightly wounded. Both 21 and 22 Platoon’s landed near the bridge and secured it. When they had dug-in and set up their defences they saw a German 8 wheeled heavy armoured car approaching their position, along with some self-propelled artillery. The call went back for the Platoon PIAT man to move forward and engage it. This he did, but in his hurry and excitement he missed and the bomb hit the farmhouse opposite and set it on fire – the enemy armoured car withdrew! Another PIAT operator managed to score a hit on one of the self-propelled guns, but it didn’t do much damage and it also withdrew. “By the early afternoon of the 24th things had quietened down at the bridge area and my Platoon Sergeant, ‘Jesse Matthews’ told me to make my way to the Regimental Aid Post to get my wounds dressed. It was on my way when I passed the railway station and I saw a glider smashed into the railway station building. This was the glider that had carried Major Vickery, the commander of ‘A’ Company, 1st Battalion, The Royal Ulster Rifles. I stayed at the Aid Station until the following day and after the breakout, was evacuated over the Rhine to Venlo. I was then flown to Brussels to the 8th British Military Hospital”

In early 2006 Tony and his good friend Lance Rooke, with their wives, participated in a tour that went from the D-Day beaches to Berlin. Along the route they paid their respects at all of the sites where they had lost so many of their friends. In March 2010 they both attended a tour that took in the sites of Operation Varsity and visited the Commonwealth War Graves Commission Cemetery at the Reichswald where so many of their comrades from the 1st Bn Royal Ulster Rifles and other comrades from the 6th Airborne Division lie at rest. 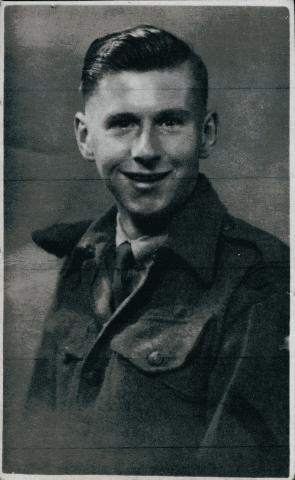