Thomas Anthony ‘Tony’ Richardson was born on 9 August 1922 in Egypt, the eldest son of Maj Gen TW Richardson, and educated at Wellington.

He enlisted into the Essex Yeomanry and saw action in Normandy on 6 June 1944. This was his first action and he was in charge of a troop of four Sexton self-propelled 25-pounder guns firing in direct support of 1 Battalion The Hampshire Regiment.

Having been amongst the first Gunners across the Seine, the Essex Yeomanry took part in the capture of Lille before advancing beyond Nijmegen with the 43 Infantry Division in the attempt to reach the 1st Airborne Division at Arnhem.

Whilst he qualified at both the Staff College and the Military College of Science, the latter by serving there as an instructor on the design of gun mountings, in 1958 he joined the Directorate of Land/Air Warfare in the War Office. He was appointed MBE at the end of this assignment for his work in connection with the introduction of helicopters into the Army Air Corps.

After service with 1 Royal Horse Artillery (RHA) in Germany, first as Battery Commander and then as Second in Command, Lieutenant Colonel Richardson went to the Ministry of Defence as the Deputy Chief of the General Staff's Military Assistant. On being selected to command 7 Para RHA, he undertook parachute training.

Brigadier Richardson reverted to a ground role as Commander Royal Artillery of 2 Division in the Army of the Rhine in 1967, becoming Director of Army Aviation in 1971.

Major General Richardson later went to New Delhi as Defence Advisor to the British High Commission. He was appointed CB in 1974 and retired from the Army in 1997.

After leaving the Army he was active in several charitable and fund-raising organisations.

He married Katherine Joanna Roberts in 1945. She predeceased him and he married Anthea Fry, daughter of Professor Dennis Butler Fry in 1991. His second wife survives him with a son and daughter of his first marriage.

Information and photograph from Gunner Magazine, May 2015. 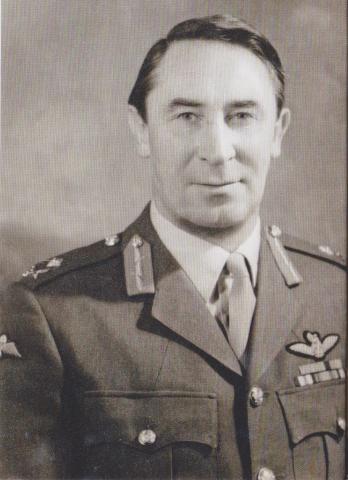