Thomas Peverley Alderson was enlisted into the Royal Electrical and Mechanical Engineers prior to volunteering for service with The Parachute Regiment in 1944.

He qualified as a military parachutist on course 112, which ran at RAF Ringway in May 1944 and served with A Company,12th Parachute Battalion in Normandy, the Ardennes and the Rhine Crossing.

Tom Alderson was seriously wounded at Hamminkeln, on the Rhine Crossing, in March 1945. He was carried to a farm on a door and operated on by Lt Urquhart in a pig sty.

Four years later he enlisted into the Territorial Army with 44 Parachute Field Ambulance and rose to the rank of Company Sergeant Major before joining 4 Coy, 10 PARA, as a private soldier in September 1951. He was swiftly promoted through the ranks to Sergeant.

While training during the 1956 summer camp, Tom Alderson broke his leg when cliff scaling with 42 Commando, Royal Marines. A couple of years later he took part in an SAS escape exercise White Knight in February 1958 on Dartmoor and was 'captured'. Some over zealous interrogation techniques by his SAS captors resulted in him passing out four times during the exercise!

In 1959 he was promoted to Colour Sergeant.

In June 1965 he attended a six week course to qualify as an Assistant Parachute Jump Instructor (APJI) at No 1 Parachute Training School, RAF Abingdon, where he developed a reputation as the course comedian.

He was onboard a Hastings aircraft in the final week of the course for a parachute drop at RAF Weston on the Green, when it crashed shortly after take-off killing all 41 occupants on board.

The passengers included two other NCOs attending the APJI course and eight recruits about to do their qualifying jump. 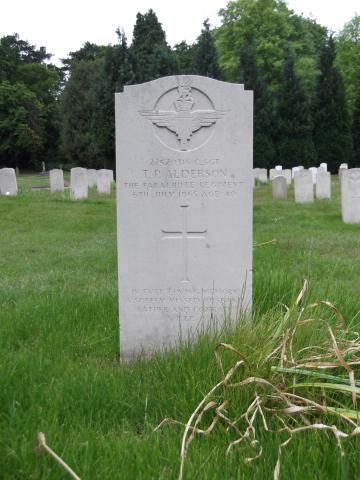