He qualified as a military parachutist after attending course no 123 which ran at RAF Ringway from 3 to 17 July 1944 and  took part in the Battle of Arnhem, during Op Market Garden later that year. Sgt McGregor served as 2i/c of No 8 Section in C Troop.

Parachute trained troops jumped just after 14:00 hours on Sunday 17 September with the remainder of men and equipment arriving by glider. Most of the Squadron was ready to depart from Renkum Heath by 15:40 hours, with C Troop tasked to lead the advance towards Arnhem. Lt Bucknall proceeded in one jeep with the first three men available from his section: Troopers Goulding, Brumwell and Gorringe.

Sgt Tom McGregor followed in a second jeep with the remaining men of No 8 section: L/Cpl Thomas with Troopers Pearce, Minns, Barlow and Haslar.

After departing the Heath the Squadron's leading jeeps made good progress and stopped to rendezvous on the approaches to Wolfheze. It was decided that Lt Bucknall's Section would take the lead in the advance a couple of miles further on from the RV. At the agreed position No 9 Section pulled over and Bucknall's two Section jeeps swept through at speed followed by No 7 Section. Having taken the level crossing the jeeps advanced down Johannahoeveweg which ran eastwards from the station as a narrow avenue. About a third of a mile from the Wolfheze junction the road dips down and up again. The railway embankment running parallel commands the space around this dip.

As Bucknall's jeep proceeded down into the dip and up the other side it was ambushed by a defensive blocking line of men from the 16th SS Panzer Grenadier Battalion. Almost immediately McGregor's jeep was also fired upon and Trooper Minns was hit and fell out.

The following extract is reproduced from 'Remember Arnhem' by John Fairley published by the Pegasus Journal:

"McGregor following standard procedure and perhaps conscious of what had already happened up ahead to Bucknall and the others, ordered dismounted action, and his men ran to take up whatever firing positions they could find in the unpromising  and exposed territory that lay to each side of the road.

There was no time for deliberation on the matter. Thomas and Hasler followed the wounded Minns and dived beneath the jeep. The other three scattered for cover in the sparsely wooded area to the left of the road. There, McGregor threw himself into a shallow ditch, whilst Pearce and Barlow found protection behind the trunks of a pair of slender oak trees. One difficulty about engaging the enemy was that, although the Germans up ahead could be seen quite plainly moving about among the trees, those on the railway who were pinning the Reconnaisance men down were screened by the bushes and could only be detected occasionally by the muzzle flash from their rifles.

Arthur Barlow remembers what happened then: 'I began firing around the side of the tree, and straightaway a machine gun started to remove large chunks of bark just above my helmet, I remember seeing Sergeant McGregor rear himself up on his hands to have a look around. He fell flat on his face and died without making a sound'." 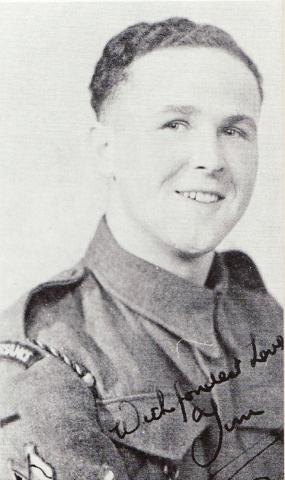