‘Tony’ Openshaw  volunteered for The Glider Pilot Regiment while serving with The Royal Welch Fusiliers during World War II, and upon completion of his initial flying training was selected for C Squadron, under the command of Major ‘Dickie’ Dale, which operated Hamilcar gliders.

They landed successfully, with a Tetrarch light tank of the 6th Airborne Armoured Reconnaissance Regiment onboard, and after a few days were withdrawn back to England to prepare for further operations.

They took off on their next operational sortie on 17 September 1944, this time with two Bren Gun Carriers of the 1st Battalion, The Border Regiment, to landing Zone Z near Wolfheze in Holland as part of Operation Market-Garden. The Battalion formed part of the 1st Airborne Division, tasked with capturing the Rhine crossings at Arnhem.

After delivering the Bren Gun Carriers to the LZ, 'Tony' and Peter joined the rest of C Squadron for their secondary task - the defence of the south side of LZ S to the north of Wolfheze.

They fought throughout the battle of Arnhem and helped to maintain the defensive perimeter at Oosterbeek until the withdrawal south of the river on the night of 25/26 September. Sadly, Peter Hill was swept away and drowned after the assault boat carrying him across the river took a direct hit from a mortar bomb. ‘Tony’ Openshaw was safely evacuated back to the UK and survived the war. 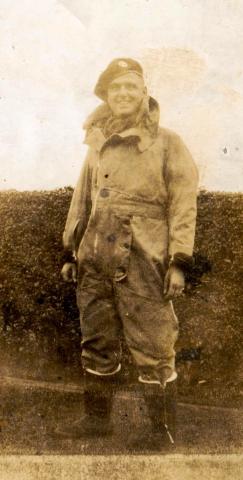