Thomas James Pratt was born on the 8 October 1917 at Barnsbury, Islington.

He enlisted into the 7th Battalion, The Royal Berkshire Regiment (TA) on the 18 January 1940.

On the 3 November 1941, by now a Lance Corporal, he was posted to the 2nd Parachute Battalion, having volunteered for Airborne Forces.

After completing the selection phase at Hardwick Hall he went on to parachute course No 4 at RAF Ringway, 17 to 23 December 1941 and he gained his wings having completed 2 balloon and 5 aircraft descents.

Upon completion of his parachute course he was posted to B Company of the 2nd Parachute Battalion, then stationed at Bulford.

In early November 1942 the 2nd Parachute Battalion, as part of the 1st Parachute Brigade sailed for North African and set up base at Maison Blanche after docking in Algiers on the 12 November. This was part of ‘Operation Torch’, the Anglo/American invasion of North Africa. On the 29 November Private Pratt took off with his Company and the rest of the 2nd Parachute Battalion to carry out a parachute drop and operation near Depienne in Tunisia.

The next day he was reported as missing and then on the 6 March 1943 he was officially listed as a Prisoner Of War in Italy.

Upon the collapse of the Italian Government in September 1943 he and several other prisoners took the opportunity to escape from their prison camp and “head for the hills”. Here they stayed for many weeks until it became apparent that they would be given away by Italian Fascists and they headed for Switzerland. After successfully reaching Switzerland, Private Pratt was repatriated back to England on the 25 October 1944.

After some leave he was posted to an Airfield Depot on the 19 December 1944, but after requesting a return to his old unit he posted back to the 2nd Parachute Battalion on the 24 December 1944.

He was sent on parachute course R154, RAF Ringway, 19 February to 3 March 1945. This was a refresher Course. His instructor comments: Cheerful, boisterous, rather slack. Needs more body control on landings.

He transferred back to the Royal Berkshire Regiment on the 19 December 1945 and was then discharged to the Army Reserve on the 20 May 1946.

Back in civilian life he went to work for the London Railways as a Train Washing Machine Attendant. 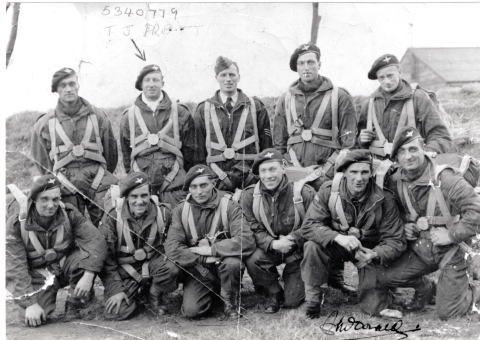 Debra Pratt said:
So overwhelmed that I have just found my dad Thomas James Pratt on your website. Very sadly I was just 7 years old when he passed away. He is my hero. I am now 53. I will post some more photos very soon. I was doing some family research and stumbled upon your website. Thankyou so much it has made me feel so happy to see my mum and dad with my brother Tom in the photo. My mum and eldest brother Tom have also passed away now. Thankyou again.
Add your comment