Tom Hicks first worked as a Calling up lad in 1934 for London, Midland and Scottish Railway (LMS)

He worked his way to be a steam engine driver. In 1939 he enlisted with The Royal Engineers and first saw service on the Longmoor Military Railway. In 1942 he was accepted as a volunteer into a new unit. The 1 Para Sqn RE, a small 150 man unit attached to The 1st Para Brigade. He served with them until 1945.

He was a No 1 Bren Gunner. His first combat mission was in North Africa 9 November 1942, Op Torch. As a member of C Troop, 1st Para Sqn.

In July 1943 he was sent to Sicily, his objective was Primosole bridge. 1800 men where sent on the invasion of Sicily, less than 1 third reached the bridge.

In September 1944 Tom was to see action again as he took part in Op Market Garden, the battle for the Arnhem Bridge. He defended the 1st Airborne Div HQ at The Harteinstein Hotel. After having his wrist broken and being shot in the neck twice, he became paralysed and was eventually captured by the Germans, taken to the Apeldoorn Hospital where he recovered enough to be sent to Stalag 11B. His POW number was 118259. The Germans forced him to work down a lead mine in horrendous conditions. He was further injured by fall ins.

He was eventually liberated by US Forces 7 April 1945.

After repatriation to England he returned to Longmoor, before being 'demobbed' in 1946.

Tom rejoined the LMS where he worked as a driver until the end of steam in 1967. He continued to drive diesel engines until retirement in 1982.

His wife ran a pub called 'The Railway Arms' in Ditton near Widnes. Tom was not allowed to be a licensee whilst working for LMS. His brothers also were engine drivers. His brother Bob was killed by a train whilst he was walking through a tunnel.

Tom stilled played tennis each week until he was 100.

Tom's profile picture was taken when he was a guest at the Airborne Assault museum in Duxford, in 2019.

Norman Hicks has written a biography for his father Tom , published by Pen & Sword, called 'Captured at Arnhem from Railwayman to Paratrooper'

Created with information from interviews conducted by B Hill and the book by Norman Hicks "Captured at Arnhem". 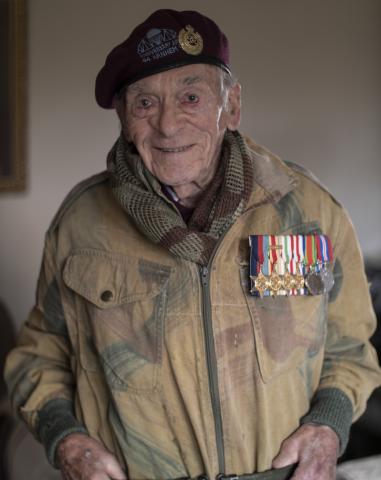