Private Blinko served in The 21st Independent Company, the Parachute Regiment (21st Independent Para Coy) and is believed to have joined the Company after its return from Italy in late 1943 or early 1944.

Pte Blinko went on Operation Market Garden with 1 Platoon, 21st Independent Para Coy, jumping in to Arnhem on 17 September 1944. On Landing his Sten Gun hit the ground and accidently fired, the bullet wounded Pte Blinko in the arm, breaking a bone. After initial treatment by the by the Platoon’s medical orderly, he was sent to the Field Ambulance Dressing Station.

He did not return to the Company, but was captured with the Field Ambulance Dressing Station and subsequently became a Prisoner of War (PoW). As a PoW he was sent to Stalag 11B in Fallingbostel, Germany, the camp was liberated in 1945.

Pte Blinko did not return to the 21st Independent Para Coy after repatriation Records show that he was posted to Corps of Military Police (CMP) in January 1946.

Roger son of George recalls this about his father:

"Like all of his generation a heavy smoker but I think his addiction to sugar was probably the thing that got him early. He was POW labour at a Sugar Beet factory and he told me that this was a source of energy to supplement the meagre POW food , after the war it became a habit to have 4-5 teaspoons in his tea."

Created with information and images kindly supplied by Roger Blinko. 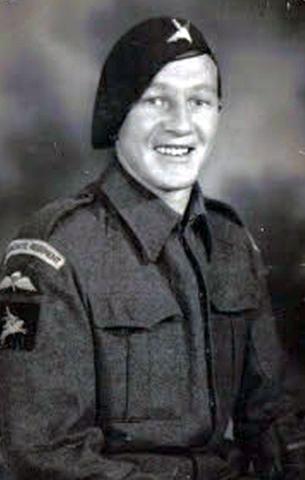