Sydney George Mann (Syd) passed away peacefully in a care home near Catterick on 2nd January 2016 at the age of 93. He was born in Tynemouth in March 1922 and joined the Royal Northumberland Fusiliers in 1940 before transferring to the 1st Battalion, Border Regiment in 1942 and achieving the rank of corporal. By this stage 1 Border was part of the 1st Air Landing Brigade of 1st Airborne Division and Sydney took his first flight in an Airspeed Hotspur glider towed by a biplane. The battalion was posted to North Africa in May 1943 to prepare for the invasion of Sicily (Operation Husky) where he landed by Horsa glider in July, but many colleagues were lost. He went by sea to Taranto, Italy before returning to England in November 1943.

His next campaign was Operation Market Garden in September 1944 to hold the vital bridge over the Rhine at Arnhem. He landed by Horsa glider on 17 September to secure the landing grounds and was part of the famous but fierce fighting against an unexpected armoured German force. With scarce food and water, light weapons and constant enemy attacks Sydney defended the shrinking perimeter near Oosterbeek until being injured by shrapnel and taken prisoner on 20 September. His wounds were treated in a German dressing station and he spent the next 8 months in a succession of German POW camps – Stalag Vb, VIIa and 373 – before being liberated in May 1945.

With the conflict in Korea, Sydney rejoined the army and was posted to the 1st Battalion, Royal Ulster Rifles in 1950 but because of his wounds sustained at Arnhem was medically discharged. His military conduct described as ‘exemplary’ in his testimonial.

Before leaving for the North Africa campaign Sydney married Elsie in November 1942 and their daughter, also Elsie, was born in 1946. They enjoyed more than 70 years of marriage. Post-war he worked in coal mining, farm labouring and driving for Securicor. He settled in Catterick Village and was an active member of the Royal British Legion, Aldbrough St. John branch and a proud member of the Airborne Brotherhood. He loved the outdoor life and travelled many miles caravanning with Elsie until the frailty of old age caught up with them. 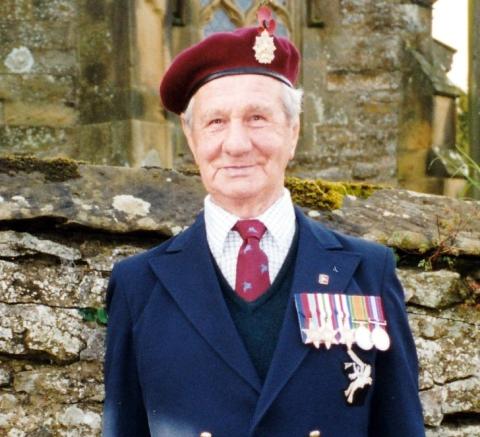