Syd Mundy decided to enlist when he was still under age in October 1940, his birthday being on 10 February 1923.

He enlisted into the 70th (Young Soldiers) Battalion, The Royal Sussex Regiment and was posted to Duxhurst Farm, near Reigate in Surrey for his basic training.

Whilst he was then stationed at Ford Aerodrome in 1942, he, along with several other young soldiers, was given an aptitude test by a visiting Education Corps team and he was found suitable to transfer to the Royal Corps of Signals. His signals training concluded in February 1943. Because he fell ill, and was sent to hospital, he missed the ‘draft’ that was made up of his course, which was sent to India. Having to wait at the Signals Depot for a further posting he was present when an Airborne Recruiting Team showed up, and he immediately put his name forward.

After the usual selection and ‘toughening-up’ course at Hardwick Hall, in mid 1943, he was sent on parachute course 83, at RAF Ringway, 15 – 24 September 1943. Upon completion of the course he and other signalers were posted to the 5th Parachute Brigade to form ‘K’ Section.

He subsequently took part in the airborne assault on 6 June 1944, in Normandy, and remained throughout that campaign until September 1944, and the 6th Airborne Division’s return to the UK.

He also saw service in the Ardennes, December 1944 – January 1945, and then Holland, January – February 1945. Soon after this he took part in Operation Varsity, the airborne assault across the Rhine on 24 March 1945 and then the advance across Germany.

He was still a member of the 5th Parachute Brigade Signals Section, detached to the 7th Parachute Battalion when they were sent to the Far East in 1945.

In early 1946 he was granted his release from Regular Army Service and returned on a troopship to the UK.

After working as a Marine Engineer with the New Zealand Shipping Company he met and married a New Zealand girl, resigned from the company and emigrated to New Zealand. 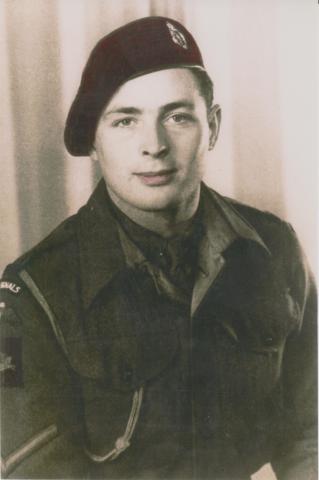