Private Stewart Ian Laing, from Gateshead, served with the 3rd Battalion, The Parachute Regiment (3 PARA) and took part in the Falklands campaign in 1982.

Private Laing died during the Battle for Mount Longdon on 12 June 1982, aged 20 years old. He is now buried at Lanchester Cemetery, Durham.

Jimmy O'Connell (author of the book "Three Days In June") recalls this about Stewart:

"I first met Stewart AKA ‘Geordie’ Laing in June 1979, we met in The Parachute Regiment Depot, we both joined 459 Platoon, and I must say I was not keen on him at first, as he was a very loud and boisterous, but as I gradually got to know him, I found a good friend who would do anything for you, he’d give you the shirt off his back if he had to. He fitted in well and made many friends. Unfortunately during P Company he sustained an injury and sadly had to leave our platoon while his injury healed.

When I passed out of Para Depot I was sent to 3 Para, who were based in Germany at the time.

However, such was Stewart’s strength of character, that as soon as he was well enough, he re-joined another platoon and completed P Company and proudly passed out of Depot.

In 1980, approximately April / May, the 3rd battalion was now back in the UK and based in Tidworth Wiltshire, I was in B Company when Stewart arrived in the battalion, he was posted to A Company 3 Para, and once again Stewart was a very popular character, but not long after he arrived, the battalion was sent to Northern Ireland on a six month posting over 1980/1981, he was based in Armagh, I was in Aughnacloy, shortly after the battalion returned from Northern Ireland he and I both applied to do an anti-tank cadre, and shortly after we joined Support Company, Anti Tank Platoon, here Geordie made lots of friends like Pat Harley, Kev Connery, Johno, Mushrooms, Terry Martin, Charlie Hardwick, and many more, in fact too many to mention, We went to Canada and had a ball! Life in the battalion was great, I can honestly say those years were some of the happiest times of my life, great times with great friends.

Then came April 1982, off we sailed on the SS Canberra, and as a platoon, we drank our fill and would often sit in deck chairs at the back of the boat and put the world to right over a few beers. When we landed, Support Company was divided between the various rifle companies’. Stewart was attached to B Company and on the night of the attack on Mount Longdon he was attached to 6 Platoon, he was killed trying desperately to save a friend who’d been wounded and was pinned down by the enemy fire, this was a typical act from Stewart, never thinking of himself always thinking of others, sadly Stewart like many others received no official recognition for his bravery, but we know what he did, and how brave he was.
He will always be remembered by those of us who knew him, not a day goes by that we don't think of him or the other members of the anti tanks who died that night and the rest of the battalion, Whenever I think of him its always with a big smile on his face, he was and still is a great loss.

From your mucker, Jimmy O`Connell" 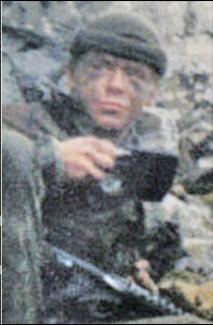 DILIP DEY said:
Stewart Laing joined 460 recruit platoon after recovering from an injury while training with a previous platoon. I remember him as a strong robust big hearted character with an indomitable spirit, and a distinct North Eastern accent. RIP Stewart, you're not forgotten.
Raymond John Dixon said:
Stewart 'Bulldog' Laing was one of my very best mates, we got our wings together and passed out with a great bunch of lads who made up 461 Platoon. I went to 1 PARA and 'Bulldog' to 3 PARA. I still remember those unforgettable times at Brize my good friend, and with a lump in my throat and a tear in my eye I salute you. RIP My Airborne Brother, Your Good Friend 'Dixie'.
Add your comment