Steve was born in Norwich in 1956 and then moved to Woodbridge Suffolk where his father was stationed as a member of the United States Air Force, hence his nickname “Yank”. Attended Farlingaye High School, he was also a member of Woodbridge Army Cadet Force. In 1971 he left school to an intended career as a carpenter and joiner but after a year at college he left to join the Army.

In December 1972 he arrived in Aldershot to join the Junior Parachute Company, after passing P Company and his Wing course with 397 platoon he was then posted to the 2nd Battalion the Parachute Regiment in March 1974 serving with A, D and C Company Patrols but mostly with the Mortar Platoon.

In 1982 he was also a member of the Task Force which was sent down to liberate the Falkland Islands from the Argentine Forces. With 2 Para he saw action at Goose Green, Wireless Ridge and the liberation of Port Stanley.

In 1996 on retirement he had served nearly 24 years in the Parachute Regiment and attained the rank of Colour Sergeant. He served in many countries around the world which included six tours of Northern Ireland, two tours of Belize, two years in Berlin and a posting to 10 Para (V) as a Permanent Staff Instructor with the Mortar Platoon, in Southend.

In November 1996, Steve joined the Army Cadet Force as an Adult Instructor and was appointed as 2IC at a Para Detachment, then in County HQ assisting with the Adventure Training and the Dof E awards until his retirement in 2011 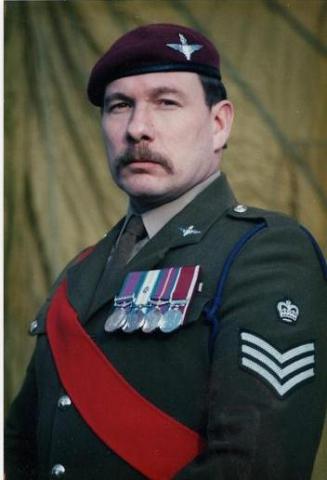