Stephen Littlewood Dorman was born in Stafford, Staffordshire in 1916.

Stephen Littlewood Dorman was granted a commission, as a Second Lieutenant, in the Corps of Royal Engineers on the 18 October 1939.

As a Captain he was posted to Hardwick Hall, near Chesterfield, where he was tasked with forming, and commanding, the first ever Parachute Engineer Unit – 1st Air Troop, Royal Engineers – on the 3 November 1941. This was to be a part of the 1st Parachute Brigade, then also in the process of forming up.

He went on Parachute Course No 4 at R.A.F. Ringway, 17 to the 23 December 1941, along with Lieut. C.D.H. Vernon and the first seventeen Other Ranks of his Troop.

In November 1942 the unit, by now the 1st Parachute Squadron, R.E. – with Capt SL Dorman now promoted to Major – in command, sailed to North Africa to take part in Operation ‘TORCH’. As part of convoy P10 half of the Squadron sailed from the Clyde on the 1 November, with the other half following in convoy P30, under the command of the 2 I/C, Capt DC Murray.

The squadron arrived at Algiers between the 12 and 13 November 1942, and moved to the airfield of Maison Blanche, where they were to immediately prepare for further parachute operations. Part of ‘C’ Troop was already on an operation with the 3rd Parachute Battalion at Bone, and now Major Dorman was ordered to attach his ‘A’ Troop to the 1st Parachute Battalion for an operation, due to take place on the 15 November, but actually jumped at Souk-el-Arba on the 16 November 1942.

At 1300 hours, 16 November Major. Dorman undertook an air reconnaissance of the Tebessa and Souk-el-Arba area’s and returned to Maison Blanche at 1700 hours the next day.

The enemy, by now fully alerted to the presence of the Allied Force that had landed in the Algerian area, bombed the airfield and its facilities at Maison Blanche on the 19 November, but the Squadron suffered no casualties. Major. Dorman had Squadron HQ and ‘C’ Troop moved up to Rouiba between the 18 and 29 November.

Next, he was ordered to attach ‘B’ Troop to the 2nd Parachute Battalion for a drop that took place on the 29 November 1942.

Between the 6 and the 11 December the Squadron moved by rail and motor transport to the Beja area in Tunisia, where all the detached Troops came back under Major Dorman’s command.

The War Diary for the 1st Parachute Squadron, R.E. has the following entry:

18 December 1942. Capt A Hewitt went out to meet Major. Dorman, who was not at RV Enemy patrol DL intercepted Capt Hewitt and infantry patrol.

19 December 1942 OC Bde ordered that attack on tank harbour by RE Party would not take place.

20 December 1942. Sappers Jones and Coupe (Major Dorman’s Party) returned to BEJA. They reported that Major Dorman had ordered them to remain behind, halfway to the objective, and to wait for Capt Hewitt (who missed them). Major. Dorman and the infantry patrol left them, and they heard firing about an hour afterwards. Later a friendly Arab told them he had seen some English soldiers wounded by the Germans. He directed them back to our lines, which they reached the next day.

Major. Stephen Littlewood Dorman was listed as missing in action, on the 18 December 1942, aged 36.

The son of John Ehrenfried Dorman and Madeline Louise Dorman (nee Bostock), of Stafford BA (Cantab.), he has no known grave and is commemorated on the Medjez-el-Bab Memorial, Face 9, Tunisia.

Created with images and information kindly donated by R Hilton. 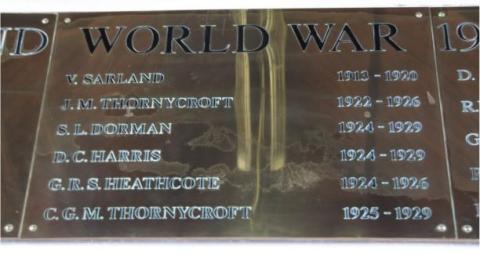