On the 1st Sea tail to France 17 August 1944. [3]  At the beginning of September the 1st Sea Tail moves from Bayeux in Normandy towards Belgium and arrives 3 miles to the West of Brussels on the 8th September. Later that same day they moved to the East side of the City, and settled into billets at Bertham near Louvain. They remained in that area until just before the start of Operation ‘Market-Garden’. On the 22 September they final began to advance up the ‘corridor’ towards Eindhoven, and the next day they reached Veghel, where they halted. An Advance Party went to Nijmegen on the 25 September, and on the 28 September they returned with the Battalion survivors to the Main Body, who by now had moved back to Louvain. On 3 October the 1st Sea Tail sailed from the Continent arriving back at Stoke Rochford on the 4 October. [4] The 1st Sea Tail comprised of 1 x Officer & 67 personnel - nearly all of them drivers, storemen, clerks, etc - very few fighting men.

Promoted to Lance Corporal 5 October 1945, and appointed Acting Corporal the next day.

[1] This date is two weeks before the official date upon which the unit is stated to have formed, see War Diary. Also at that time the official title was 2nd Parachute Battalion, Army Air Corps – The Parachute Regiment was not the correct title until the following year.

[2] This is purely administrative, as he is already serving with an ‘Airborne Unit’, but is probably to show that he now no longer a member of the K.O.Y.L.I.

[3] This is the exact date that the 1st Seaborne Echelon (Sea Tail) landed in France in support of a proposed airborne operation, that was then cancelled. 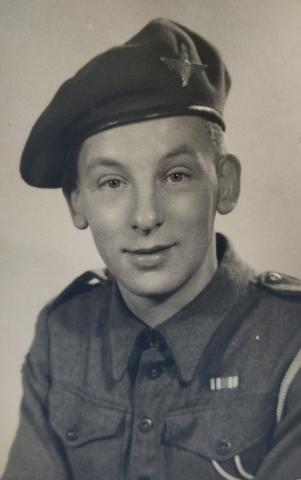