Stanley Edward Barrett was born in the area of Custom House, East London on the 22 November 1917. After leaving school at 14 he had a couple of jobs but settled into the butchering trade.

He enlisted into the Durham Light Infantry on the 15 January 1940, and on 16 May 1941 Private Barrett was posted to the 2nd Battalion, Ox & Bucks Light Infantry. Whilst being trained he qualified as a mortar gunner and an MT driver.

Pte Barrett returned to England with his Battalion to train for the Rhine crossing, but on 23 December 1944 was sent back to North West Europe to fight in the Ardennes offensive.

He returned to the UK with the remnants of his Battalion on 25 February 1945.

On 24 March 1945 he took part in Operation Varsity, the Rhine Crossing.

Private Barrett was discharged from the Army on 1 March 1946. He was awarded the 1939-45 Star, France & Germany Star, Defence Medal and War Medal.

On returning to Civvy street he was employed as a coalman until the late 60s.

By the Barrett Family 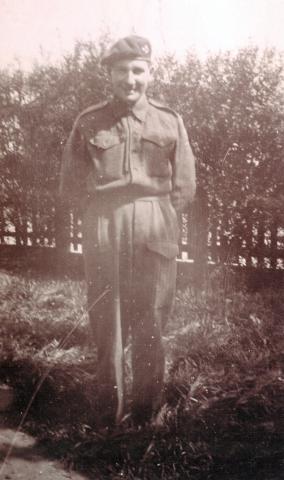