Captain Stanley Adamson, son of Henry and Margaret Adamson, of Belfast, Northern Ireland, was granted an emergency commission with The Royal Engineers during World War II.

In early 1944, he volunteered for the Airborne Forces and qualified as a military parachutist on course 132 at RAF Ringway, which ran from 4 to 14 September 1944. He was later posted to 9 Field Company (Airborne) RE which had suffered heavy losses during the Battle of Arnhem, and served with the unit during its liberation of Norway. He was subsequently awarded the King Haakon VII Liberty Medal.

While in Norway 9 Field Company was reorganised, renamed 9 Airborne Squadron, and redeployed to join 6 Airborne Division in Palestine.

Jewish saboteurs mounted a campaign to dislocate the Palestinian railway network and terrorize the train crews. In November 1946 this campaign intensified resulting in 21 attacks against the railway in the first three weeks. The saboteurs employed two principal techniques: mining the railway by night in order to blow up a passing train the following day or simply blowing up the permanent way, which would disrupt services until it could be repaired. The former was more lethal, invariably resulting in the loss of life.

Around this time the saboteurs introduced a new type of anti-handling device to the railway mines. Unaware of the booby trap, a fellow officer (Captain Newton) was called to make safe one such railway mine and lost his life. The following day, another mine probably of the same type, was reported on the railway near Petah Tiqva, and Captain Adamson was sent to investigate. Unfortunately the Arab railway ganger who had found it, was unable to explain exactly where it was hidden in the ballast; the mine exploded while Captain Adamson was searching for it, killing him instantly. Another officer and a Sapper who were with him were seriously wounded. 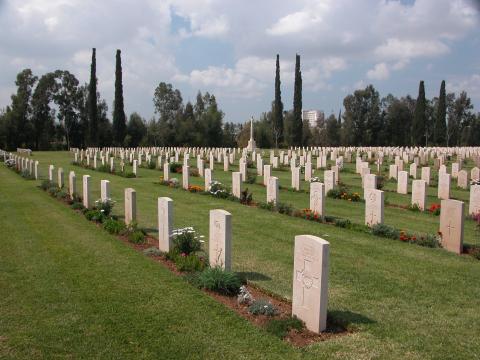