Stańislaw Karpiński was born in 1900 at Gostyniń, near Warsaw. At 16 while living in Kiev, he joined the Polish Military Organisation, a secret military organization which gathered intelligence and carried out sabotage, for which he undertook many dangerous tasks. In 1918 he returned to Poland and joined the newly formed Polish Army’s 21st Infantry Regiment, ‘Children of Warsaw’, and fought in the Polish-Soviet War (1918-20). In 1920 he was transferred to the 18th Heavy Artillery Regiment and took part in the Battle for Warsaw, the “Miracle on the Vistula”. After the war ended Karpiński resumed his studies and graduated from the University of Warsaw with a Master of Laws and Political Science degree. He became a lawyer and was a member of the Polish Bar, practicing in Upper Silesia, south west Poland. He also served as Reserve Officer in the Polish Army.

In August 1939 he was called up as a Lieutenant in the 75th Infantry Regiment and fought in the September Campaign in southern Poland. With his unit he retreated eastwards until he was hospitalized. Then he was evacuated to Romania where he was interned. In February 1940 he managed to escape and, making his way through Yugoslavia and Italy, reached France to rejoin the Polish Army.

He was attached to the 11th Infantry Regiment as Information Officer. This regiment together with the 10th made up the newly formed 4th Infantry Division, whose deputy commander was the then Colonel Sosabowski, later commander of the Polish Parachute Brigade. Karpiński’s unit was evacuated from La Pallice near La Rochelle on board SS Alderpool, and he arrived in England on 22 June 1940.

On arrival, his unit was sent to Scotland to defend the coast of Fife. There his unit subsequently became the 1st Polish Independent Parachute Brigade Group. He did his parachute training at RAF Ringway in July 1941, making his first jump when he was 40 years old; 8 years above the normal age limit for Polish paratroopers (32). He served as one of the Brigade’s Intelligence Officers. In addition, he was chosen by Sosabowski to be the Brigade’s Security Officer. Sosabowski wrote about this choice in his autobiography, Najkrótszą Drogą (The Shortest Way, 1957).

“Surprise is the main weapon of parachute troops. The success of an action seriously depends on maintaining full secrecy…

When organizing the security service in the Brigade, I very well understood that I had to achieve a balance that would both exclude the existence of a police system in the section and on the other hand would ensure security against possible subversive action...

I found the solution, by appointing Captain St. Karpiński, an officer of high intelligence and moral standards as the chief of the service. Accomplishing his duties perfectly, he kept an ideal balance between the feeling of fulI freedom and the needs of security. Performing this responsible and thankless duty, which naturally causes one's colleagues to keep a distance, not only was he able to gain my appreciation and total trust, but he was also liked and respected by all soldiers, no matter what their rank and position was...

The report was written in the aftermath of the Operation. Karpiński’s experience of Operation Market Garden was characterised by the misfortune that dogged the whole operation. Because of bad weather the main Polish parachute drop to reinforce the beleaguered British 1st Airborne Division was delayed until 21 September 1944. On the way, some of the Polish drop was recalled, but Karpiński’s ‘plane continued towards the dropping zone at Driel, near Arnhem.

However the ‘plane, called “Wild Hare”, a Dakota C-47 of the 50th Troop Carrier Squadron, USAAF, became separated from the remaining ‘planes. Over an estuary it was badly damaged by anti-aircraft fire from barges. The pilot, 1st Lieutenant F. R. Renwick, was barely able to maintain control and steered away from enemy-held areas. As he was not sure he could keep control for much longer, the stick of 14 paratroopers had to jump prematurely over liberated Belgium. They did not see what happened to their badly damaged 'plane, which they presumed had crashed. (In fact “Wild Hare” managed to reach England and crash landed at RAF Gravesend, and all the crew survived.)

Karpiński landed by hop fields on a road near Poperinge, close to the French border. He commandeered a truck and took his stick via "RAF 19 Staging Post", St Omer (France), Tournai (back in Belgium), Lindle, Aalst, Eindhoven, and Nijmegen, along "Hell's Highway". After what must have been a very difficult journey, they re-joined the Polish Parachute Brigade after it had been withdrawn from Driel. The Brigade was then stationed west of Nijmegen to guard temporary airstrips in the Neerloon area until 7 October 1944 when it was withdrawn back to England. The report is mostly about this period.

Karpiński was demobilised from the Polish Resettlement Corps in 1948. He took up his legal career again, re-training to work in the English legal system, first as a barrister and then as a solicitor serving the Polish community in London.  He married Barbara Hancox whom he had met in Scotland.  She had been in the First Aid Nursing Yeomanry driving ambulances for the Polish 1st Corps. After the war, Karpiński remained a friend of General Sosabowski. In a professional capacity Karpiński drafted the General’s will and witnessed it. Under the will General Sosabowski requested that Karpiński be employed in proving the Will and transacting any legal matters in administering the General’s estate, which he did after the General’s death in 1967.

Around 1950 Karpiński became Chairman of the Polish Paratroopers’ Association, and it was in that capacity he gave a radio interview to the BBC which was broadcast in Polish on 24 September 1950. This transcript in English is thought to be the only surviving version.

Unfortunately the consequences of this interview for Captain Karpiński's family in Poland were serious. This was at the height of the Cold War and the Communist Government in Poland was very sensitive to any broadcasts by the Polish émigré community in the West. The Communists regarded the existence of this community and the post-war Polish government in exile in London as a threat to their regime because they represented a link to the pre-war Polish state replaced by the Soviets.

Captain Karpiński's son was detained by the Polish secret police, held and interrogated at the Ministry of Public Security. Very fortunately after a few days he was released without charge. As a result of what had happened to his son, Captain Karpiński resigned as the chairman of the Paratroopers' Association.

Karpiński died in London at St Thomas’s Hospital in 1969. Some of his paratrooper’s uniform, equipment and documents are now part of the collection of the present-day Polish Army’s Stańislaw Sosabowski 6th Airborne Brigade at their barracks in Kraków. 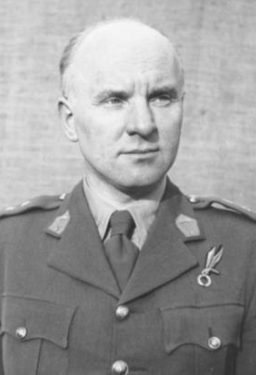