Spenser Philip Robert Hollott  joined the British Army (Royal Corps of Signals) in April 1938 at age 17, and served as a Signalman for the next four years.

He was attached to the 1st Airborne (1st Parachute Brigade) in April 1942. Spenser was trained at RAF Ringway on Course 13. Here he completed 2 descents from a balloon and 5 from an aircraft. After this he qualified for the 'Parachute Qualification Badge'.  Lance Corporal Hollott then was posted to 1 Coy Signals Section in October 1942.

He served in North Africa (Operation Torch), Sicily (Operation Fustian). He saw service at Arnhem (Operation Market Garden), where managed to cross the Rhine to return to England. After which he was promoted to Corporal.

In September 1945 he took a commission with the Royal Sussex Regiment. He later served with the British Army On the Rhine until 1948, including a stint guarding Rudolf Hess at Spandau Prison in Berlin.

After leaving the British Army, Lt. Hollott emigrated with his family to St. Catherines, Ontario, Canada where he served as the Governor of the Lincoln County Gaol for a number of years. He later moved to Vancouver, where he completed a B.A. in political science from Simon Fraser University.

In 1969 he moved to Victoria, British Columbia with his second wife. He worked as a correctional officer and with the BC Sheriff Service until his retirement in 1982. His hobbies included farming, and reading and he told wonderful jokes. Spenser Philip Hollott died in December 1983. 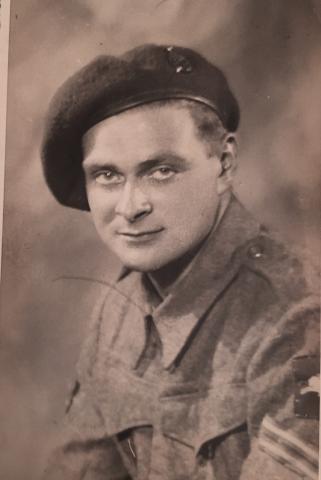