Captain Spencer Daisley, husband of Una Daisley, of Molescroft, Yorkshire originally enlisted with the East Yorkshire Regiment on 9 October 1924 and served with 2nd Battalion for  a short time before transferring to 1st Battalion, East Yorkshire Regiment. He rose progressively through the NCO ranks in the late 1930s and the early months of the Second World War, before gaining an Emergency Commission as a Lieutenant, Quartermaster in May 1940 with 50th Battalion, East Yorks Regiment.

In May 1943 he joined 2/4th Battalion, South Lancs Regiment which would shortly become Airborne as 13th (South Lancs) Parachute Battalion in June 1943. Along with the rest of the Battalion, he embarked upon an intensive training programme in preparation for the Airborne insertion to North West Europe planned for the following year.

Leaving the UK from RAF Brize Norton on 5 June 1944, he took part in the glider insertion to Normandy during Op Overlord onboard a Horsa carrying a 13th Parachute Battalion jeep and trailer, motorcycle and five soldiers.

The glider, flown by S/Sgt Colin Hopgood with Sgt Daniel Phillips (Horsa CN35, Glider 133 - towed by an Albermarle Mk No 1823 from 297 Squadron RAF), crash landed at Saint Vaast En Auge on the 6th June 1944. The glider should have landed at Ranville (12 miles S/E), but the tow rope broke when the plane reached the French coast, probably due to the anti-aircraft Flak. The glider crashed into trees, killing the two pilots.

Three passengers, Cpt Daisley, Pte Aldred (his batman) and Sigmn Davis (a despatch rider) died in the crash. The remaining two Airborne soldiers were later found sheltering in a washhouse near the crash site. They were fed by a villager for two days, before being captured trying to escape to Allied lines. 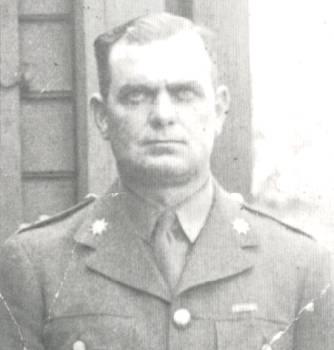