Sidney 'Sid' Dewey was born in 1937 to a single mother in Carshalton Surrey. Following an extremely troubled childhood, he directly enlisted for military service with Airborne Forces, The Parachute Regiment at Croydon, Surrey on the 17th of December 1954, aged 17 years.

Training as a member of 40 Platoon, Sid arrived at Depot The Parachute Regiment in January 1955 and completed his parachute training on Parachute Course 395 at RAF Abingdon on the 31st of March 1955.

After training Sid was posted to 7 Platoon - C Company - The 1st Battalion The Parachute Regiment (1 Para) as a private soldier. Under the command of 2nd Lt Geoffrey Keggen Maddrell and together with good friends, Brian Day and Tom Godwin, Sid was actively engaged in deployments to Cyprus (Eoka Campaign) and the Suez Crisis (Operation Musketeer) during 1956.

During operations in Kythrea Cyprus, when moving fast into a cordon position, Sid together with a Grenadier Guards Major, who was among a group of Grenadier officers accompanying 1 Para, accidentally fell in to an open sewer. Both were covered from head to toe in raw sewage and it was noted in the April 1957 edition of the Pegasus Journal, that the Major 'was disgusted, but Dewey could only show fascination for the fact that his Bren-mag box was floating' in the sewer, much to the amusement of his comrades.

Sid was an extremely active member of the West Berkshire Branch of the Parachute Regimental Association (PRA) and with his death in 2014, the West Berks PRA lost its founder member.

Setting up a PRA Branch from scratch required great drive and determination, qualities for which all members of the Airborne Brotherhood are famed. The fruits of Sid's labours have resulted in over a quarter of a century of airborne comradeship, enjoyed by a large number of members.

In 1993, Sid was instrumental in the commissioning and erection of a memorial stone at Walbury Hill, Inkpen, Berkshire, dedicated to the remembrance of members of the 9th Battalion The Parachute Regiment, who in the fields and woods below the hill, in May 1944, commanded by Lt Col T B H Otway. DSO rehearsed plans for their successful assault on the German Coastal Artillery Battery at Merville in France, prior to the seaborne invasion of Normandy on the 6th of June 1944.

The dedication and unveiling ceremony of the memorial stone took place on the 22nd of May 1993 and it was attended by the then Colonel Commandant of the Parachute Regiment, Lieutenant-General Sir Michael Gray KCB, OBE. long standing Chairman of the Airborne Assault Normandy Trust.

To say that Sid had an unfortunate childhood is a massive understatement and but for his decision to join the Parachute Regiment, his life could easily have taken a far less beneficial course.

At the age of 5 a neglected Sid and his two younger half-brother siblings were taken into care, when one evening his mother stood at the front door of their home with a rickety old pram and told Sid that she was going to the gas works to collect coal for the fire. Having locked the children in the house, she never returned.

The following day Sid broke the glass in a first floor bedroom window and threw a cot mattress on to the street outside to help enable the traumatised trio to escape. Whilst attempting to climb out of the window Sid attracted the attention of a good samaritan who called the police. Sid's mother was eventually traced and subsequently imprisoned for the neglect and abandonment of the three children.

As was the norm during this period of time, no attempt was made to support and keep family groups together. Half a century passed before Sid's two younger half-siblings, plus an additional and previously unknown to him, five further half-siblings were traced and reunited. Sid never saw his mother again from the day she abandoned him and his half-siblings.

In care for a short period of time, then 'out of the frying pan and into the fire'. Through no fault of his own, Sid became an unwitting casualty of the then deeply flawed, child 'boarding out' policy. Sid was removed from care and settled with what can only be described as the foster family from hell.

The fostering of Sid came with benefits for the foster family, which included a handsome weekly payment and ration card to provide food for him, but Sid went hungry, his rations were used to feed the foster family. Sid had to scavenge for left over food discarded by patrons of the pub which the foster parents ran.

Sid was isolated from the family and brutalised through regular and savage beatings, which included being attacked around the head and body by the foster father with a fire poker. Sid was left with severe bruising to his body, face and head together with a 3" gash to his lip and cheek. Following the attack Sid was locked in a loft room for a considerable period of time, so that visitors to the foster parents pub would not see the physical damage that had been caused to him.

Used as unpaid child labour, Sid was rarely sent to school in favour of cleaning and other duties connected with the foster family's pub, alongside setting up and preparing a mobile fish and chip van, which the foster family also ran in the evenings.

Poorly provided for Sid on one occasion asked for some new boots because the soles of the ones he was wearing had completely perished. The foster father duly obliged in providing Sid with a replacement pair of boots obtained from the local black marketeer. When Sid complained that the new boots were to tight, he was beaten and told not to complain. Forced to wear the ill-fitting boots Sid suffered extreme pain and discomfort and went on to develop gangrene in both of his feet which required him needing intensive medical care. In what appeared to be an act of benevolence on the part of the foster father, but no doubt driven by blind panic, connected with Sid's grave condition, the foster father gave Sid a paper bag containing some sweets, but being so unwell, Sid was unable to eat them. Sid's condition slowly improved and feeling better he asked the foster father if he could have one of the sweets he had previously been offered, only to be told by the foster father, that because he was getting better, he didn't need the sweets and he had taken them away.

In addition to the neglect and appalling beatings he suffered, Sid was also subjected to degrading psychological and emotional torment, ranging from verbal abuse and intimidation, to planned acts of humiliation.

At the age of 6, Sid spent his first Christmas with his new family. After the foster family had opened their Christmas gifts, Sid was handed a parcel and told to open it, only to find it contained a lump of coal. A tearful and somewhat bemused Sid was then handed a second parcel, which he opened and found contained a bar of soap and scrubbing brush. A laughing foster father told Sid to use the soap and scrubbing brush to clean his hands once he had finished playing with the lump of coal.

On a slightly funnier note, as a regular visitor to the foster parents' pub, the black marketeer supplied the family with illicit goods which were subject to rationing. On getting wind that the local police were planning a visit to the pub, the foster father in panic and to, as he saw it, prevent the waste of 5lbs of illicitly obtained butter, instructed Sid to rub the butter in to the skin of the rather large pig they kept. Sid recalled this brought about great hilarity to all those watching, as he wrestled with an extremely large and very unhappy pig covered in butter.

Another move saw Sid and the foster family at a pub in Surrey where, at the local army recruiting office, the 17 year old Sid signed up for military service. The day he signed up Sid went home and told the foster father that he was joining the army. Without hesitation the foster father told him to collect up his belongings and get out of his sight, as he was of no further use to the family, resulting in Sid being homeless for a period of time, prior to starting his Parachute Regiment training.

All went well with Sid's Para training, until one fateful night at Brecon, when a somewhat intoxicated Para Colour Sergeant entered the billet in which Sid and other members of 40 Platoon were housed. Upon entry the Colour Sergeant pulled Sid from his bed and said to Sid, words to the effect "what do you lot really think of me?" Having been woken from his sleep and taken completely by surprise, Sid for reasons best known to himself, told the Colour Sergeant exactly what he thought of him. Sid's response resulted in him being dragged outside of the accommodation block by the Colour Sergeant, who then metered out some 1950's style army punishment, which saw Sid completing Brecon training with two black eyes, a broken nose and no front teeth.

Many of Sid's comrades from 1 PARA remained lifelong friends and in particular Brian Day, who when going on Christmas leave, noticed Sid sitting alone on his bed in the barrack block. Brian asked Sid why he wasn't ready to go on leave and Sid told him that he had nowhere to go and was staying on camp, to which Brian said "pack your case, you're  coming home with me." Sid was introduced to and spent Christmas with Brian's family, who gave him a Christmas to remember and from that point on treated Sid as one of the family.

Old school and no shrinking violet, Sid was extremely proud of serving with 1 Para and of earning his place as a member of the Airborne Brotherhood, both of which had an immensely positive impact on his life.

An obituary notice for Sid was written by Malcolm Rowlands (West Berks PRA) and published in the 2014 edition of the Pegasus Yearbook. 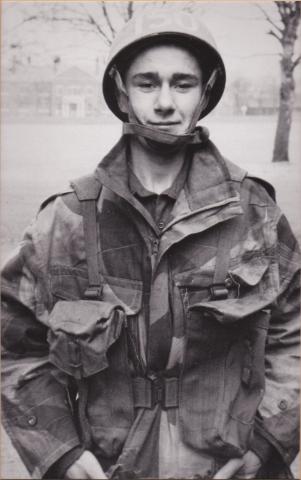