Sherdy Vatnsdal was an instrumental figure in the development of freefall parachuting in the British Army in the 1960s, who served with 1 PARA.

A Canadian, Sherdy was initially a member of St Catherines Parachute Club, Ontario and came fifth in the Canadian National Championship in 1960. He also competed in the inaugural Scottish Parachute Championships in 1961 and although not in the overall rankings he landed closest to the target – a mere three feet away!

While on Summer leave from the Army in 1963 Sherdy and Edward Gardener were running freefall courses for the Army Parachute Association at Middle Wallop and Thruxton. During lengthy evening discussions over many pints of beer, Major John Weeks (one of the pioneers of sport parachuting in the Regiment and the first Secretary of the APA), Sherdy and Edward Gardener discussed the idea of forming a full time display team within Airborne Forces.

These discussions eventually led to the formation of the Parachute Regiment’s Freefall Display Team in 1964. At the time of its formation, Sherdy was the team’s most experienced jumper and in the same year he became the Army and British National Accuracy Champion.

On one display jump in Southampton Sherdy suffered a mishap when friction from his harness during canopy deployment ignited a box of matches in his jumpsuit pocket. While descending into the arena he had to put the fire in his jumpsuit out. Not an easy task with the forward travel speed creating a wind draught to fan the flames! Sherdy succeeded but not without suffering a large burn.

In 1966 he served in the Joint Services Freefall Trials Team. He also won the 7th Australian Parachute Championships in the 1966/67 season.

Later in his career Sherdy transferred to the Army Air Corps and qualified as a helicopter pilot.

He remained a fit athlete throughout his life and in 1981 completed the New York Marathon in 4hrs 24 mins aged 45 years.

After leaving the Army Sherdy became a commercial pilot. 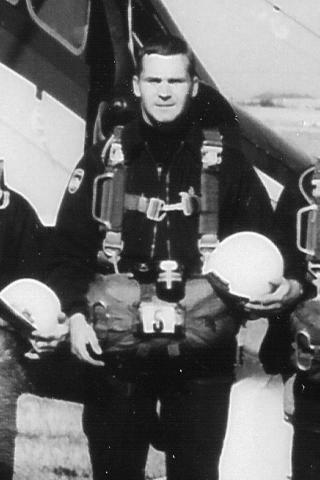