He originally enlisted in the London Irish Rifles in 1939 and  later volunteered for the airborne forces on the formation of No 1 Parachute Brigade. By the Summer of 1942 he was serving in the Intelligence section of the 1st Parachute Battalion while it was based at Kiwi Barracks in Bulford and undertook a conversion course to parachute from the American C-47 aircraft.

Shane travelled to Scotland with the Battalion and boarded the 'Arundle Castle' at Greenock, bound for North Africa to take part in Operation Torch. Shortly after arriving in the Port of Algiers the Battalion was transported to Maison Blanche airfield for its first combat jump at Souk-el-Arba on 16 November 1942. Engagements with the Axis forces in the Beja sector over the next few weeks included an attack on a tank harbour at Gue Hill in which the Battalion's Commanding Officer was critically wounded.

Following Gue Hill, Alistair Pearson took command of the Battalion. After various moves the Battalion was ordered to some foothills commanding the Tunis plains, where the Germans held a series of hilltop fortifications. One of these Djebel Mansour commanded a deep valley and the main road to Tunis and the Battalion was ordered to take this peak along with its neighbour, Djebel Alliliga. Shane would not have been far from Lt Col Pearson as the hilltop assault took place in the early hours of 3 Feburary 1943. Although dislodged from their secondary objective by a counterattack, the Paras held onto Mansour.  It was only after they ran out of ammunition that they were forced to withdraw.  The ferocity of this engagement can be measured by the fact that in a space of a few days the battalion suffered 182 killed, wounded or missing.

By the beginning of March Shane had been promoted to Corporal and the Battalion was holding defensive positions in the Tamera Valley, where it was subjected to heavy shelling and repeated enemy attacks. The topography of the area meant it was relatively easy for the enemy to infiltrate inbetween the sparsely held defensive positions and on 8 March, the Battalion was attacked on 3 separate occasions. At around 10.00 hours on 11 March 1943 a German attack infiltrated to within 50 yards of the Battalion Headquarters. Lt Col Pearson rallied a counter attack with men from his Headquarters Company. Although the situation was restored, Shane was seriously wounded in the action.

After extensive recuperation, Shane Kearney was selected to attend an Officer Cadet Training Unit and later posted to the 7th  (Light Infantry) Parachute Battalion as commander of No 9 Platoon, C Company. He received refresher parachute training on course 128 which ran at RAF Ringway from 7 to 20 August 1944.

He fought in the Ardennes during the Battle of the Bulge and in one letter home written in January 1945 he recorded: "All night it snows and the drifts are piled high, and then the wind sweeps down which makes a pretty big desolation everywere. The people here are very good to us, though they were terribly treated by the Germans. Houses were wantonly wrecked. Men deported for forced labour and the old people left starving. There is a terrible hatred of the Germans here and I am sure that these people at least will never forgive or forget."

Shane later took part in Operation Varsity, the Rhine Crossing,on 24 March 1945 and was killed a few days later as C Coy attempted to secure a crossroads held by enemy forces blocking the eastward advance of the Brigade. (See Battalion War Diary extract below.) He received a posthumous Mention in Despatches on 9 August 1945 for his actions.

Compiled by Harvey Grenville with the kind assistance of Shane Burkhart 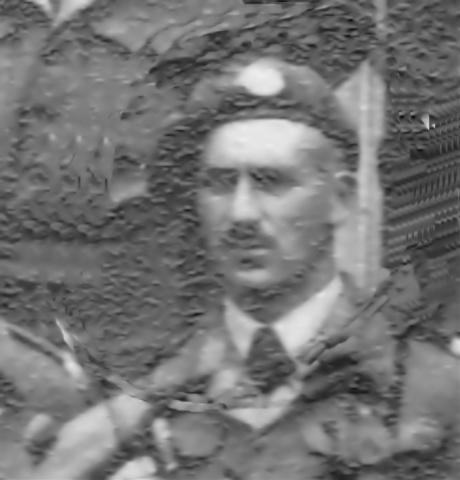