Samuel P Walsh enlisted into the London Irish Rifles in June 1939.He volunteered for airborne forces, at the age of 21 years, while serving in the Middle East in 1943.

Pte Walsh undertook his parachute training at Ramat David, initially on course 66 which ran from 13 to 25 September 1943 but he could not complete due to an ankle injury. He went on to qualify as a military parachutist on course 73 from 13 to 21 October 1943 and joined the 11th Parachute Battalion.

Records show that during Operation Market Pte Walsh was serving with HQ Company, the 2nd Parachute Battalion as batman to Padre Egan MC. Pte Walsh was wounded by a gunshot wound to the left knee on 17 September and was later taken prisoner with Padre Egan when the injured were captured.

As a Prisoner of War Pte Walsh was eventually held in Camp XIB Fallingbostel. 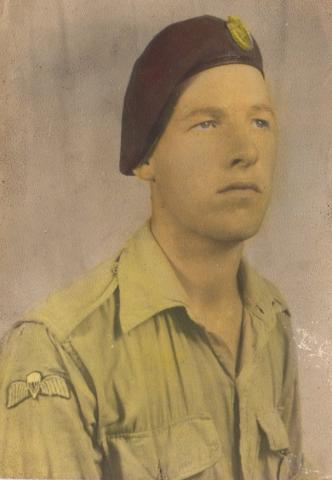