Aged 18, he parachuted into Normandy on D Day, but dropped wide, landing at Lisieux. On landing, Private Ritchley’s weapon was damaged, and armed only with a 9mm and knife, he fell in with a group of Resistance Gypsies.

Pte Ritchley stayed with the group for several months, moving around the countryside. On 9 August Pte Ritchley was shot by a German whilst attempting to join up with the British forces outside Troarn.

Pte Ritchley was interrogated and then sent to Stalag XII in Luxemburg. He soon escaped, but was recaptured and sent to Stalag IVB IVD. He eventually returned home after the war on 9 September 1945.

For 37 years, Roy made an annual pilgrimage to pay his respects to the fallen in the 6 June commemorations.

By Rebecca Blackburn with information supplied by the Pegasus Archive. 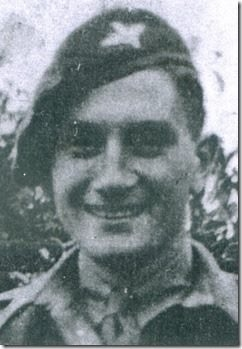