Roy Kenneth Farmer was born in 1924; the son of John & Lily Farmer of Bassett, Southampton, England. He joined the army in about 1942 initially as a Gunner of the Royal Artillery (uniformed as in photo). His older brother Geoffrey was in the Parachute Regiment and at some point Roy managed to obtain his transfer to the Para’s.  He was assigned to the 13th (Lancashire) Battalion the Parachute Regiment (Luard’s Own) which had been formed from the 2/4 South Lancashire Regiment in Jun-Jul 1943 in preparation for the invasion of France.  Roy was posted to the Machine Gun Platoon, HQ Coy, under the command of (then) Lieutenant Ellis "Dixie" Dean.

He travelled to war with 19 other comrades in a Stirling out of RAF Keevil callsigned "H" for "Hellzapoppin".

At 23.48 on 5th June 1944, they took off but the flight was not without incident. As the aircraft neared the coast of France, the German Ack-Ack units were alerted, searchlights started to probe the sky and the flak guns opened fire.

At 0.40 on D-Day the stick jumped over LZ “N” but there were problems as fellow stick member Private John SURGEY attested … “the pilot aborted the run in by switching on the red light as number 8 of the stick was about to exit, but he still jumped. John SURGEY followed his particular pal "Taffy" PRICE as did Sergeant George KELLY at number 10 and Private Ken LANG number 11. But then jumping stopped and the aircraft with its 6 man crew plus the last 9 members of the stick disappeared. No trace of "H" for "Hellzapoppin was ever found and the crew and remaining stick were posted Missing in Action (MIA).

During the whole of D-Day, 13 Para suffered only 15 fatal casualties, 9 of which were accounted for by the loss of “H” for “Hellzapoppin”. One of these 9 was Roy Kenneth Farmer, age 20.

May he Rest in Peace.

Compiled by with kind assistance of Brian Duffy for ParaData 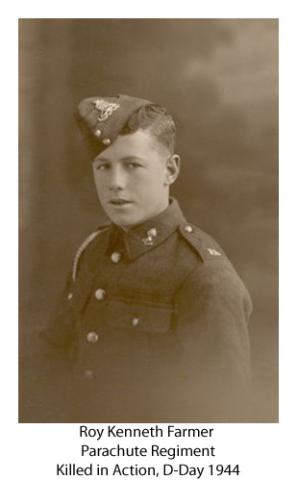