Driver Roy John Appleton was the son of Ernest Sidney and Dorothy Agnes Appleton, of Queenborough, Kent. He served with 398 (Airborne) Composite Company of the Royal Army Service Corps.

The Coy was immediately thrust into training on glider transport and anti-aircraft firing in the Winter and early Spring of 1944. It was in this period the unit was designated as part of the Seaborne Echelon, undertaking vehicle and landing craft training and extensive work on Waterproofing of equipment up to May 1944.

Driver Appleton was part of the Coy element landed on Juno Beach, for Operation Overlord in June 1944, which subsequently set up a DMA. It came under incessant mortar and shellfire, causing multiple casualties. 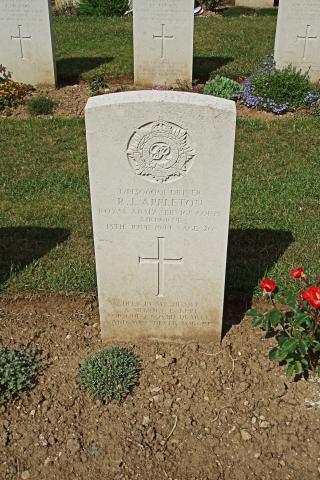