Roy Allen was born in 1913, the son of James Lovell Allen and Edith Annie Allen, of Brighton. Upon leaving school Roy completed an apprenticeship as a centre lathe turner at Gosport, but was then unable to obtain regular employment so signed on as a regular in the Royal Engineers.

After training he joined 9 Field Company, supporting the 4th Infantry Division, and he was a corporal when they were on active service in France and Belgium in 1939/40. The Company was deployed in the rearguard actions protecting the Dunkirk evacuation and, on 31 May 1940, they occupied foxholes at Rosendael on the outskirts of Dunkirk. German shelling was continuous and sadly nine members of the unit were killed or wounded by one shell. Roy was one of the wounded but he was able to march with the Company to the beaches where they boarded a Grimsby trawler and stepped on to British soil early on Sunday, 2 June. The Company became scattered but came together by the end of June at Monmouth. On a day out there, Roy met Winifred Preece from the nearby village of Llandoro, and they married in 1942. The Company was later based at Chipping Sodbury, Gloucestershire, and in August 1940 they were ordered to Bere Alston on the outskirts of Plymouth. Here they sustained casualties during the frequent air raids whilst clearing bomb damage and maintaining essential services. Between September 1940 and January 1941 the Company was based at Bude, engaged in laying mine fields and erecting defences along the coast. The Company then moved to Wallingford where they took part in exercises until mid-summer when they re-located to Ilminster, and were at Wiveliscombe by the end of the year.

Early in 1942 the Company was selected to train as an airborne unit and during the period of transition was stationed at Bulford. About a third of the Company’s strength qualified as parachutists at RAF Ringway, Manchester; their drop zone being at Tatton Park, near Knutsford. Later all personnel in the Company were also trained as glider-borne troops. By May 1942 they were re-designated as the 9th Field Company R.E. (Airborne) and, on 19 June 1942, became part of the 1st Airlanding Brigade, 1st Airborne Division. Twenty volunteers from the Company were amongst the forty-one who died during the ill-fated, glider-borne Operation Freshman on 19 November 1942 to destroy a heavy water plant in Norway. (See separate account on ParaData.)

On 16 April 1943 the Company sailed from Gourock, on the River Clyde, in the liner Boissevain bound for North Africa. On 9/10 July 1943, the Company, as part of the 1st Airlanding Brigade, was engaged in Operation Ladbroke, the first of two hazardous glider landings in Sicily. Some men from the 9th assisted in the capture of the Ponte Grande bridge near Syracuse and others in the Company dealt with coastal defences which could be an impediment to the main invasion force. After being relieved by the advance spearhead of the invasion force, on 16 July, they were taken back to Tunisia in Infantry Landing Craft.

On 8 September 1943, the whole Company sailed from Bizerta in the American cruiser U.S.S. Boise for Operation Slapstick, as part of the invasion of mainland Italy, and during the voyage they learned that the Italian forces had capitulated. They landed at the port of Taranto and for the next month they carried out various tasks including repairs to the dock and mine clearance. The 9th later moved forward with the advancing forces and on occasions small parties operated behind enemy lines cutting railway lines thereby denying the Germans reinforcements and supplies. A detachment of eight Sappers under Corporal Roy Allen sailed in an Infantry Landing Craft to Salerno where they cleared about 700 mines from the beaches. Roy was commended for this task and possibly Mentioned in Despatches. He was later promoted to Lance Sergeant.

The 9th returned to the UK in SS Duchess of Bedford, landing at Liverpool on 12 December 1943 and moved to Lincolnshire. Company H.Q. was in the village of Tattershall and their billets were in the nearby village of Coningsby. Some restructuring took place and Roy was placed in charge of No 4 Section in No 1 Platoon. The Company soon became involved in a series of exercises in preparation for the invasion of Western Europe. In May 1944 the 9th moved south to Hurn in Hampshire to prepare the airfield for Operation Overlord (D Day). They extended the runway and carried out other construction work before moving back to Lincolnshire in early June. A number of planned airborne operations were abandoned before the Company was finally redeployed in Operation Market (the Airborne element of Operation Market Garden).

Just after 10.00 hours on Sunday 17 September 1944 sixteen glider and tug combinations took off from RAF Keevil for Arnhem as part of Operation Market Garden. Horsa Glider RJ113 (Chalk 389) was in this group of aircraft and contained 21 men, including Roy Allen, from No 1 Platoon 9th (Airborne) Field Company Royal Engineers. The glider was flown by S/Sgt L J Gardner and co-pilot Sgt R A Fraser from D Squadron, The Glider Pilot Regiment. It was towed by a Short Stirling, No. LK 148 of 299 Squadron, 38 Group.

As a result of the explosion on board Roy and his comrades became the first casualties of Operation Market Garden. There were no children of Roy’s marriage and his wife is now deceased. Three brothers and a brother in law who served in the armed forces, survived the war. Roy is commemorated on the Double Hills memorial at the site of the crash along with the other 22 occupants of the glider.

Lance Sergeant Allen died on 17 September 1944, aged 31 years old. He is now buried in plot Y.301 at the Milton Road Cemetery, Weston Super Mare along with other soldiers killed by the crash. 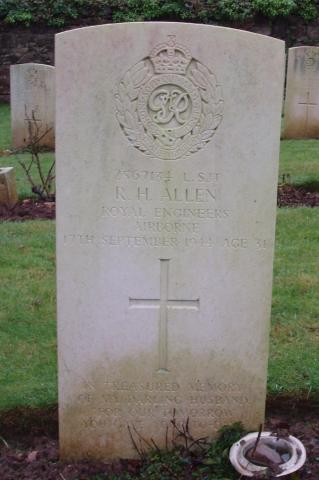