Ronald William Sumners joined B Company, 3 PARA, in March, 1956 and was soon accepted as a good soldier by his platoon.

He played football and basket-ball, but he will be remembered particularly as a keen photographer.

For three months he had been a member of the Officer’s Mess Staff as he was hoping to go into the catering trade on leaving the Army.

When the battalion was ordered to Egypt he re-joined his old Company, and was killed on 5 November 1956 during its attack on the sewage farm as part of Operation Musketeer, having set a fine example to his platoon by his resolution and calmness.  He was 19 years old.

His body was returned to the UK and is now buried at Tidworth Military Cemetery. 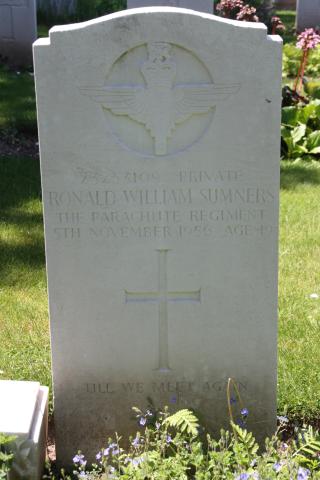