Ronald William Albert Moon, son of William and Winifred Moon of Southborough Tunbridge Wells, Kent, enlisted into the Queen's Own Royal West Kent Regiment during The Second World War. He then volunteered for airborne forces in October 1942.

Private Moon undertook parachute training course 36 at RAF Ringway from 6 to 12 1942. He was posted to The 2nd Parachute Battalion (2nd Para Bn), serving in North Africa, Sicily and Italy.

On 17 September 1944 he jumped into Arnhem on Operation Market Garden as a member of 4 Platoon, B Company, 2nd Para Bn.

Three days later he was killed in the rear garden of Dr Niekerks house at 18 Eusebiusinnenensingel. He died instantly when a tracer bullet or sharpnel hit him in the head.

In ‘B Company Arrived’ by David Van Buggenum, comrade Don Smith recalls how Pte Moon offered him assistance when wounded directly before being killed, and Norman Dellar remembers the 'remarkable ring' on Pte Moon’s hand as he seemed to reach out while lying peacefully on the ground.

After the Battle Pte Moon’s body was never found and he is now commemorated on the Memorial at Groesbeek Canadian War Cemetery, near Nijmegen.

Profile image from 'B Company Arrived’ by David Van Buggenum 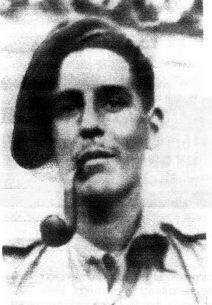