Ronald Tidball was Parachute Jump Trained at RAF Ringway on Course 89. This course ran from 28 Oct to 9 Nov 1943. His Instructor noted this about Ronald's performance on this course: "Intelligent and reliable".

Ronald was a medic. He flew to Arnhem with No.5 Platoon, S Company, 1st Battalion. When S Company moved along Utrechtseweg on 18 September they were ambushed near the railway bridge. Several men were wounded and Tidball crawled to them and brought the men to an aid post. He even used a wheelbarrow to move the wounded. It is said he brought 22 men to the aid post. The Company then moved to the south to outflank the ambush. Tidball and a couple of other medics were still in the aid post and there they were captured by the Germans. He was taken to Stalag IVb, and given the POW Prisoner number 249182.

In December 1999 a Dutch paper (De Telegraaf) wrote an article about Ronald Tidball. At that moment he was living in Redruth, Cornwall.

On 28 March 1991 Tidball received an award of the Dutch Regiment Geneeskundige Troepen (Dutch RAMC), the so called 'Regimentslegpenning'. The Dutch even had a 'Committee Ron Tidball', under Captain B. Vos. The awarded was given to him by Lieutenant-Colonel Haak. Tidball was the first one ever  to get this. 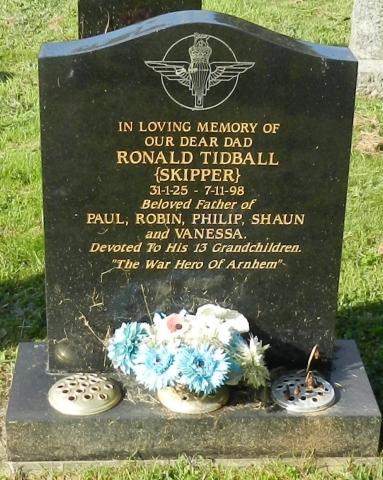