Ronald P Gibson was born in Kandy, Ceylon (now Sri Lanka) in 1920. After a short time overseas he returned to England where he was educated.

On 17 September 1944 as part of Operation Market Garden (First Lift) he flew a Horsa Glider to Arnhem with his second pilot – Sgt Ernest ‘Sim’ Simion, a German-Jew from Berlin.  The Horsa carried a six-pounder Anti-Tank gun, a jeep, and two members of the Anti-Tank Platoon of 1st Battalion, The Border Regiment.

Later in the battle, as a consequence of the move of the South Staffordshire Regt down toward the road bridge in Arnhem, 2 Wing GPR were employed as infantry holding a section of the 1 Airlanding Brigade area of the Oosterbeek perimeter.  On 19 Sept 44 ‘F’ Sqn were involved in particularly fierce fighting. Ron’s second pilot, ‘Sim’ Simion was killed in a trench nearby during a well co-ordinated infantry assault mounted by SS troops.  Ron Gibson survived a series of similar attacks and eventually escaped across the Rhine at the end of the battle during Operation Berlin.

After the war Ron Gibson left the Army Air Corps and studied to become an Architect.  After the death of both of his parents he moved to Kenya where he married and subsequently immigrated to Australia.  After four years in Australia he was seconded to Papua New Guinea where we worked for the rest of his life until his death in 1977.

He wrote about an engaging narrative of his personal experiences of the Arnhem Battle in Nine Days (1956) Arthur Stockwell Ltd. Out of print for many years, the book has now been reprinted in paperback  (ISBN: 9781780353449). It is a detailed diary of each day of the perimeter battle and the withdrawal over the Rhine.

Compiled with assistance from Mike Peters, in consultation with the Gibson Family. 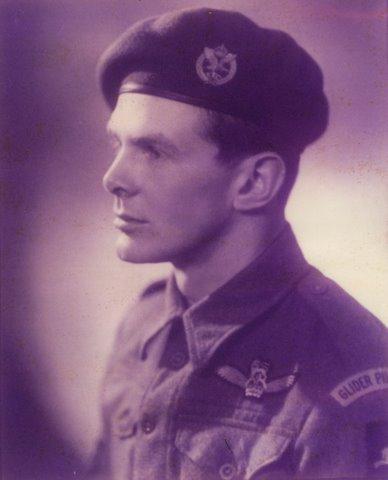 Richard Cammack said:
Hi, a very interesting life Ronald lived. Does anyone happen to know if he ever lived in Boston, Lincolnshire after the war at all? Many thanks
Add your comment