Ronald James Elliott was born in East London in 1926. He left school at 14 and became an apprentice carpenter with Mowlem.

In July 1944 he was called up, just after his 18th birthday, and joined the General Service Corps where he stayed for 2 months before joining the Royal Artilery.  He stayed with the RA for nearly 4 years, from 1944 to 1948.

Upon his return home from service he resumed his trade as a carpenter until his retirement in the early 1990s. He passed away in 2001.

Ronald very rarely spoke about his time in the Army to his friends and family and this is why I have very little information regarding his years in service.  I have pulled together some limited information that has been passed onto me by my Nan, Ronald's wife, but if you do recognise him from these photos and have any information I would be grateful to hear from you.

Editor's note: Ronald Elliott served in No 2 Battery 1st Airlanding Light Regiment RA. Records indicate he joined after Arnhem and deployed with it to Norway in 1945 for Operation Doomsday. 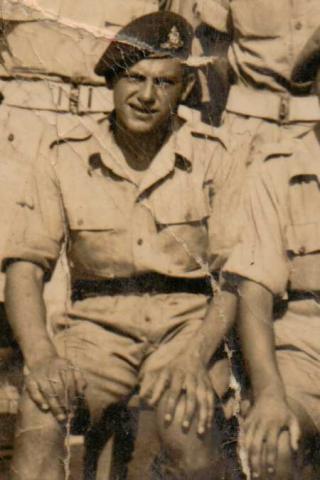