In February 1939 he was an armourer with Fleet Air Arm, Royal Navy. In Norway in 1940 he was on The Ark Royal involved in operations protecting air, land and shipping. Ronnie also saw service that year protecting convoys to Malta and The 8th Army in North Africa. He was "run over by a 'plane" and disabled 40%, which meant he was discharged from the Navy.

In 1942 he enlisted as an armourer with RAOC. in 1943 he was again sent to North Africa to help with preparations for the invasion of Italy. Later that year he was involved with The 1st Airborne's invasion of Italy.

In September 1944 as a member of The 1st Airborne Division, REME, armourer/infantryman he took part in Op. Market Garden. He was wounded twice before being captured and imprisoned in Stalag 11B POW number 118065.

Profile created from a letter written to the editor of The Pegasus Journal in 2011 by Ronald G Jordan. 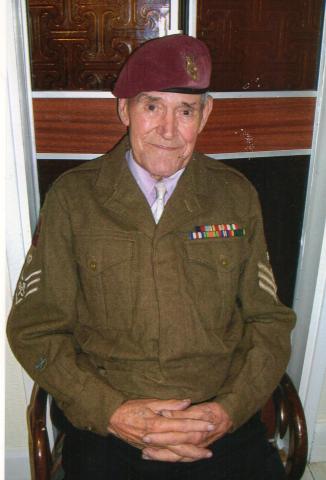