Ronald Desmond Goodwin was born on 19 October 1923 and came from Welton, Lincolnshire. His civilian trade was Cellarman.

Under the rules of the Territorial Army he enlisted into the 70th (Young Soldiers) Battalion, The Leicestershire Regiment on 14 January 1942.

He began his training on 29 January and then volunteered for Airborne Forces in November 1942. After the selection process, carried out at the Depot School and Airborne Forces at Hardwick Hall near Chesterfield in Derbyshire he was sent on parachute course 40 at RAF Ringway, 23 November to 11 December 1942.

Part of the way through the course he was sent home on compassionate leave, after completing 2 balloon descents and 3 aircraft descents. He was then put onto the next course that was running to complete his jumps and was awarded his parachute badge on 14 December 1942.

He was then posted, officially, to the 6th (Welch) Parachute Battalion, which was part of the 2nd Parachute Brigade on 15 December 1942. He embarked for North Africa on 13 April 1943 and disembarked there on 22 April 1943. Here he trained with his battalion for a drop onto the island of Sicily, but it was called off when the ground forces advanced faster than at first thought.

He then took part in ‘Operation Slapstick’, the landings at the port of Taranto in Southern Italy on 9 September 1943. Unfortunately the ship that the 6th Parachute Battalion was on, HMS Abdiel, hit a mine as it entered the harbour and sank very quickly with great loss of life. Fusilier ‘Ron’ Goodwin was initially listed as killed in action, until it was realised that he had been successfully picked up amongst the survivors from the waters of the harbour.

It took some time for the battalion to re-organise itself and they then took their place alongside the rest of the 2nd Parachute Brigade ‘in the line’ in Italy. Eventually the brigade became an ‘Independent’ formation and the only British Airborne Unit in that theatre of operations.

In June 1944 they were withdrawn from the front line to prepare for an airborne operation. This would be ‘Operation Dragoon’, the invasion of Southern France and the 2nd (Independent) Parachute Brigade Group would be the only British unit involved. The 6th (Welch) Parachute Battalion took off from Galera airfield near Rome, being transported by American crewed Dakota aircraft on 15 August 1944.

Ron’s aircraft, chalk number 4, dropped its stick of paratroopers very short of the Drop Zone at Le Mitan by 10-12 kilometres, near Frejus, just inland from the coast. He was posted as Missing, believed a POW on 18 August, but it was not until 2 February 1945 that he was confirmed as a prisoner of war in Germany. He had been sent to Stalag IVB and given the POW number 294123.

He was liberated in May 1945 and repatriated back to England on 23 May. After survivors leave he was initially posted to the 202nd Field Regiment, RA on the 30 August 1945. He was then posted to the Army Air Corps Holding Battalion on 20 September 1945.

Ron was then posted to the 1st Parachute Brigade Headquarters on 22 November 1945 and then embarked for the Middle East on 24 March 1946. Whilst serving in Palestine and Egypt he was promoted firstly to Lance Corporal and eventually up to Sergeant by 1947. He embarked for return to the UK on 30 March 1947 and was discharged from the Army on 2 July 1947. 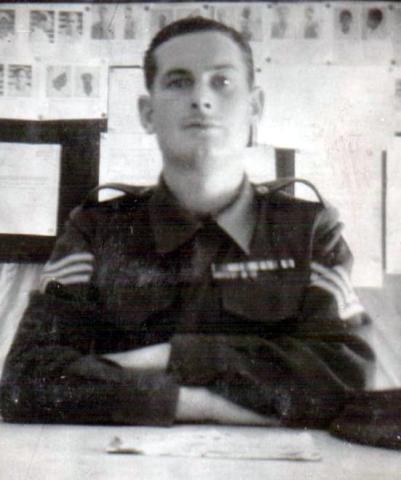