Ron Ward, known to friends as 'Wardy', served with Airborne Forces in Palestine with 716 Light Composite Company RASC following the end of the Second World War and later with 16 Lincoln Coy.

Ronald Ward was born in Sturton, Leeds 24 February 1927, and the middle son of three boys to Joe and Dolly Ward. Joe had served in India with the York’s & Lancs Regt between the wars, and when the Second World War broke out he was mobilised with his new T.A. unit.

With Joe away, Dolly decided to take her sons and live back in her home town of Lincoln with her sisters. Ron left school in 1941 and worked in several jobs including for a building contractor on RAF Scampton. He was actually ‘confined to camp’ the night the Dambusters took-off.

During these early teenage years, he joined the NFS as a fire watcher and runner, seeing action in the Grimsby Blitz. At 18 he volunteered for the RAF following in the steps of his elder brother Jack. Colour blindness prevented him, but as he stepped out of the recruiting office in Newport Drill Hall, Lincoln, an army recruiter easily convinced Ron that the Airborne was the life for him and so he volunteered.

Ron was enlisted on 5 April 1945 and reported for training with the Duke of Wellington’s Regt in Colchester. Once basics were passed and because he had a driving licence, he was then posted to an RASC driving course in Bakewell, Derbyshire. From there it was off to Hardwick Hall for ‘P’ Coy, and the start of his entry into the Airborne. With Hardwick completed it was then over to RAF Ringway for jump training arriving on 12 August 1945 for Course No. B 176.

The eight jump course was completed on 31 August 1945 with the remarks against his name ‘Keen and attentive, Good performer’. It was straight on the train and down to Stratton St. Margaret near Swindon to join No 1 Para Pltn 716 Airborne Light Composite Coy RASC 6th Airborne Div. Although the war with Japan was over, the unit were issued with olive greens and started practice drops from Stirlings onto a mock up of Singapore racecourse on Salisbury Plain. Half of 716 Coy were then deployed to the Far East with 5 Bde, whilst the remainder, including Ron, went by train to Glasgow, where with the 2nd Para Bde; they boarded the SS ‘Cameronia’ destination unknown.Once at sea, the troops were informed that their destination was the potential trouble spot, Palestine, the ‘Holy Land’, landing in Haifa 11th October 1945.

The Coy’s new home was under canvas in Gaza Ridge Camp. Life was a succession of convoy work, guard duty, DR work, guard duty, cordon and search operations, immigrant boats and guard duty. In May 1946, as part of a ‘flag waving’ exercise, he jumped with a composite group of paras on the aerodrome at Khartoum in the Sudan. A combination of hot air currents and almost gale force winds resulted in 4 deaths and 97 injured out of the 143 paratroopers that were dropped.

716 Coy moved north in January 1947 to Hadeira and then to GTA Camp in Haifa during November 1947. During a detachment to 6th Div HQ Haifa, one of Ron’s roles each morning was to take a jeep with two other soldiers and check the drainage culverts under the roads for booby-traps (IEDs). At each culvert they took turns to go into the drain whilst the other stood guard. On this particular occasion Ron was standing guard when an almighty explosion blasted his unfortunate colleague back out of the culvert. His inert body smashed into Ron’s back tearing muscles away from the bone…. more tragically, another airborne soldier was added to the growing casualty list.

For Ron, recovery took place in the cool mountains of Cyprus before returning to duty. Ron survived another close call when escorting a convoy over the Trans Jordan border. They were ambushed by Jewish terrorists as the lorries entered a narrow crevasse. Several terrorists were accounted for in the brief fierce fire fight, with airborne suffering just two minor wounded.

On 16th March 1948, after two and a half years abroad the 18 year old boy returned to England as a 21 year old man. With the Airborne still in his blood, Ron joined the Parachute Regiment TA in July 1950, on paper the 18th Battalion, which was helping to form the new 16th Airborne Divisional (Lincoln) Ind Coy, Pathfinders. He has two distinguished claims with this newly formed unit; he was the first to make a balloon descent and the first to jump from an aircraft, namely a Dakota at West Bromwich.

Due to work, he took a break from TA in 1953 but re-joined 16 Coy in 1957 eventually becoming the MT Sgt. Starting his own garage business meant Ron finally left the TA in 1961. His final jump was from a barrage balloon on Lincoln Common.

As his 9 year old son, I still remember that day. Dad had the APJI pull all the static line out of its pack then he stood in the doorway hands above his head and in a ‘starfish’ configuration launched himself from the cage… just like a German fallschirmjäger.

Ron was one of the founding members of  the Lincoln Branch, The Parachute Regimental Association and in consideration of his service to that branch was made a life time President.

I followed my father into 16 Ind Coy, and it was one of the proudest things I’ve ever done. 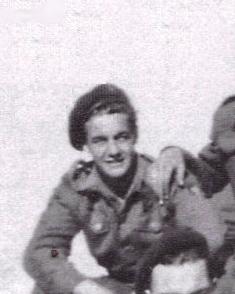