Roland Janovsky was born Roland Brooker, on the 15 July 1919, and he explains about the change of his name: “My father was killed at the end of the first world war and my mother re-married when I was about six years of age. She married a Czechoslovakian and I took his name of Janovski. He also served in the British Army in the role of interpreter. He was taken prisoner at Dunkirk and remained so until the end of the war. I changed my name [back] to that on my birth certificate when I decided that I would migrate to Australia, in order to avoid difficulties concerning who I was.” [3]

At the outbreak of the War he was living in Grantham, Lincolnshire, where he was working as a Shop Assistant, before joining the Army.

He enlisted into The King’s Royal Rifle Corps on the 15 January 1940, [1] and married Patricia in the same year.

He volunteered for Airborne Forces in 1943 and after the selection process at Hardwick Hall, he was sent on Parachute Course 59, at RAF Ringway, 5 to 16 April 1943. This was a Long Course of eight descents, 2 balloon by day, 1 balloon by night and 5 Whitley aircraft, for a large group of Parachute Brigade Reinforcements. His Parachute Instructors comments: “A steady type, has worked well throughout the course”. [2]

After the course he was sent out to North Africa, as a reinforcement, for the 1st Parachute Brigade, where he was posted to the 2nd Parachute battalion, and assigned to ‘A’ Company.

The main part of the North African campaign was over, but he and the rest of the Brigade now began training for a parachute assault on Sicily. Operation ‘FUSTIAN’ took place on the night of the 13/14 July 1943, with the objective of capturing the Primosole road bridge over the River Simeto and the high ground to the South – which was the main objective of the 2nd Parachute Battalion. Pte. Janovsky was one of those that was accurately dropped on the DZ and made it to his position, where he was accompanied by Pte. James Robertson: “He was with me in Sicily at the Catania Bridge where we were, fortunately, dropped on the DZ and were among the few that managed to capture ‘Johnny One’. An extraordinary feat, considering that German para’s were also dropped that night on approximately the same DZ, with most likely, the same objectives in mind. I know of their presence, because I saw their empty containers and their discarded chutes, also empty. The hill, incidentally, had been magnificently fortified by the Italians, including slit-trenches and double apron barbed wire fences. There was no need for us to dig in our own defences, except from habit.” [3]

In September 1943 he took part in Operation ‘SLAPSTICK’, which was a naval landing at the Italian port of Taranto, by the 1st Airborne Division. Advancing North form the port the 1st Parachute Brigade were tasked with capturing the town of Altamura, where the 2nd Parachute Battalion were in the lead. Pte. Janovsky: “Roberston and I liberated Altamura, before the rest of the Company moved in, but that’s another story.” [3]

The 1st Airborne Division returned to England in November/December 1943, and the 2nd Parachute Battalion settled into billets in the Grantham area, with ‘A’ Company being based at Easton Hall.

On Sunday, 17 September 1944, Pte. Roland Janovsky took off in a Dakota aircraft of the USAAF bound for DZ ‘X’ near Renkum in Holland as part of Operation ‘MARKET’. He then took part in the advance to the main road bridge at Arnhem and the battle there for the next four days.

He was taken prisoner in the area of Arnhem Bridge on the 21 September, and initially sent to Stalag 12A, at Limburg in Germany, arriving there on the 25 September. He remained at that POW Camp until the 3 October when he was transported to Stalag 4B, at Muhlburg, arriving at that Camp on the 6 October. However, just six days later he was moved once again, this time to Stalag 4D at Halle, arriving there on the 14 October 1944. This was a Work Camp and he was used as a labourer, clearing Allied bomb damage.

However in April 1945 he saw a chance for escape: “13-4-45. Evacuated from Halle by Germans. Escaped from main party same evening. Hid in the village of Quies, 11 km’s from Halle, east. Relieved by American Recce Group 18-4-45. Kitchener. R & Knight released with me. All were physically fit”. [4]

The other two men with him were Lance Corporal. Robert Kitchener, from 1 Platoon, ‘A’ Company and Private. James Knight, from 6 Platoon, ‘B’ Company, both 2nd Parachute Battalion.

His profile photo was taken at Grantham, just before the Arnhem operation 1944.  Roland died on 8 August 2008 in Australia, after emigration there on March 1951. 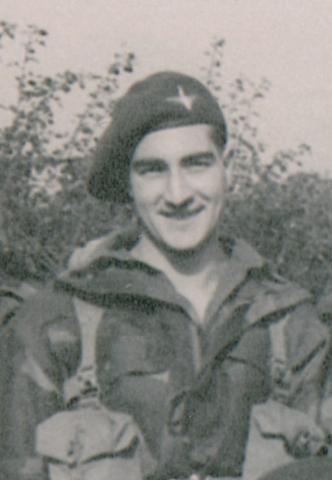