'Ron' Arnold  served with The Royal Gloucester Regiment  prior to volunteering for airborne forces during World War II.

He qualified as a military parachutist on course 92 at RAF Ringway, which ran from 17 November to 3 December 1943.The course was attended by 242 trainees who between them completed 1,803 descents.

A fellow trainee on this course later recalled: "The weather at Ringway during November 1943 was indeed very cold; fog and frost were constant companions. At night we slept with our socks on and for extra warmth we used our Greatcoats as a blanket. Needless to relate that the walls of our Nissen huts were saturated with condensation."

On completion of the course he was posted to S Company, 8th Battalion and jumped into Normandy in the early hours of 6 June 1944.

'Ron' was dropped by mistake on Drop Zone (DZ) N at Ranville instead of DZ K, and so, in the confusion that existed, he supported the defence of the nearby Pegasus Bridge before rejoining his battalion. He fought through France with his battalion until early September.

He returned to action on Christmas Day 1944 in the Ardennes and remained in North West Europe until February, when the battalion was withdrawn to prepare for Operation Varsity.

'Ron' dropped over the Rhine, jumping at 1000 hrs on 24 March 1945, and fought across Germany before meeting up with the Russians on the Baltic on 4 May.

He was one of the fortunate few in The Parachute Regiment to survive WWII with no wounds. 'Ron' returned to the UK on 20 May and was married shortly after on  21 July.

He was subsequently posted to Palestine on 22 September 1945, serving in 6 Airborne Division's peace keeping role before leaving the Regiment on 10 December 1946.

After leaving The Parachute Regiment he raised 2 children and had 5 grandchildren, celebrating 40 years of marriage before passing away suddenly of a brain tumour in 1988 aged only 63. A proud Para at all times.

Compiled with the kind assistance of Mike Arnold. 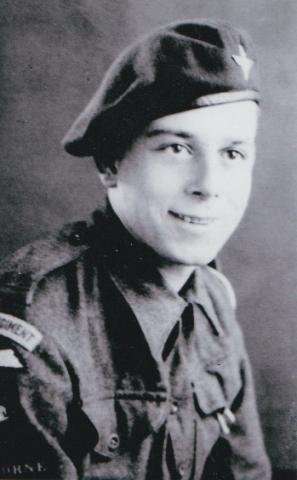