Roderick William McLeod, born in 1905, was educated at Wellington College and The Royal Military Academy, Woolwich. He was commissioned into the Royal Artillery in 1925 and from 1930 to 1932, saw service during the Khajuri Plains operations on the north-west frontier of India.

He was appointed as the first commanding officer of the newly formed 1st Air Landing Light Regiment Royal Artillery on 18 February 1943. McLeod was responsible for expanding the existing Air Landing Battery into a full Regiment in time for an operational deployment in May of that year. He succeeded, and on 16 May 1943 the regiment set sail for North Africa onboard the motor vessels Stirling Castle and Staffordshire. It trained hard for operations in Sicily in July 1943, but was not deployed. Upon the death of Lt Col Crawfurd on 13 July 1943 during Operation Fustian, Lt Col McLeod became the Commander of Royal Artillery for the 1st Airborne Division.

When the 1st Airborne Division returned to the UK in late 1943, McLeod was promoted to Brigadier and appointed as the first Commander of the newly formed Special Air Service Brigade in January 1944, a post he held until 5 March 1945.

Mike Calvert paid tribute to McLeod for his astonishing achievement in welding this force of 2,500 men into an effective organisation and the huge scale of operations undertaken from D Day in north-west Europe.*

He was awarded a Mention in Despatches (London Gazette 22 March 1945) for actions in North West Europe while he held this post along with the CBE on 14 June 1945. The citation records:

"On 6 March 1945 he took up the post of Director of Military Operations in India, where he remained until 1947.

He was appointed Assistant Commandant at the Staff College in 1948 and then Commander Royal Artillery for 7th Armoured Division, which was then part of British Army of the Rhine in 1950. He went on to become Director of Military Operations at the War Office in 1951.

Prior to his appointment as General Officer Commanding 6th Armoured Division in 1955, McLeod was the Chairman of the War Office Committee on Royal Signals Organisation."

McLeod became Chief Army Instructor at the Imperial Defence College in 1957 and Deputy Chief of Defence Staff at the Ministry of Defence later that year. An appointment as Commander of British Forces in Hong Kong followed in 1960, a post that he held until late 1961.

He was also General Officer Commanding-in-Chief for Eastern Command from 1962. During his time at Eastern Command he chaired a Committee which recommended re-organisation of the logistics services of the British Army, commonly known as the McLeod Reforms, which led to the formation of the Royal Corps of Transport in 1965.

He retired on 2 January 1965 and from 1966 to his death was Chairman of the Hockering Residents' Association.

Compiled by Bob Hilton and edited by Josephine Bailey 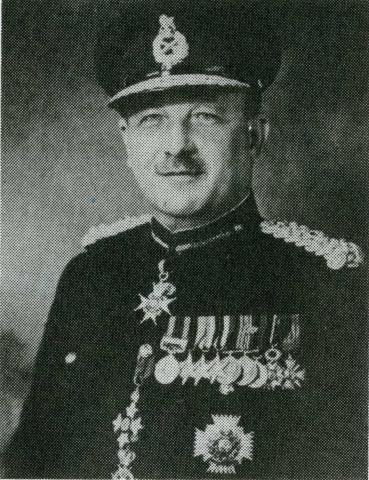