Bob Sturtivant served in 3 Company and Recruit Training Wing 10 PARA and went on to serve in the Royal Marines from 1980 to 1990.

He was a member of The Royal Marines Freefall Display Team which made a new world record in August 1986 with a 24 man stack.

Bob is now retired from Devon and Somerset Fire and Rescue Service after 22 years. 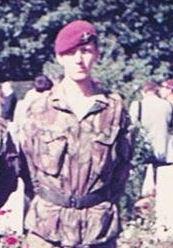