In November 1940 he was posted to a TA independent Anti-tank Battery commanded by a Major T IJ Toler. Lt Walchli was appointed Battery Reconnaissance Ofﬁcer. The battery moved with the rest of the Independent Brigade Group down to the Brecon area in South Wales to deal with the expected airborne invasion. By this time the Battery had become the 1st Air Landing Anti—tank Battery and on moving back to the Newbury area was issued with two horses —- not the winged variety, but very large and very lively hunters — Ofﬁcers-for—the—use—of.

Robin decided that he was not cut out for the cavalry and neither did he relish the prospect of gliding into battle seated as in a tube train. He decided that he would rather drive himself and therefore in March 1942 he withdrew his services from lan Toler’s Battery and joined the Glider Pilot Regiment at Tilshead. Little did he know that Ian Toler was to follow him only a short time afterwards.There followed the routine EFTS course at Booker. GTS at Stoke Orchard and then proper glider flying at Brize Norton. Lt Walchli was then posted to Netheravcn where, under tuition of Sqdn/Ldr Buster Briggs, he was introduced to the rudiments of operational glider ﬂying. Tug pilots were also being encouraged to obtain experience in ﬂying in gliders.

"One afternoon whilst carrying out a programme of circuits and bumps, Robin was pleased to have the company of one of 295 Squadron’s pilots, demonstrating a short landing ﬁnishing up on the tow line ready for the next take off without the aid of any tractor. Robin forgot that the passenger tug pilot had just thrown down his station issue bicycle on the tow line before leaping into the Horsa and managed to run over the bicycle as he came to a halt on the tow line. The tug pilot in complimenting him on the accuracy of his landing departed muttering about the advantage of engines."

Robin then joined Major Babe Cooper's squadron at Holmsley South and teaming up with Bill Chambers and Ron Owen set about preparing for Turkey Buzzard. This formidable trio towed by Tommy Tomkins in a Halifax, made their ﬁrst excursion into the Bay of Biscay on June 3rd, 1943. Foiled by sea fog, they returned to base. Their second attempt was cut short by a fuel leak on the tug but their third attempt on June 6th ended successfully in Sale Rabat. Arriving at ‘E' Strip M'Saken our ever keen subaltern carried out the ﬁrst fully loaded tests of a Horsa towed by an Albermarle in North African conditions. The results proved that during the heat of the day it was much too hot for the tug’s engines but that by dusk it was possible — just! Amongst the stragglers of Turkey Buzzard was Capt Neil Denholm who arrived at ‘E' Strip complete with Horsa and black and white spotted handkerchief tucked into his battledress sleeve to announce that "he had come to see a man about an operation." An operation from which, unhappily, he was destined not to return.

July 13th saw Babe Cooper's squadron loaded and taking off for the Primasole Bridge on Operation Fustian. Teamed with S/Sgt Mackenzie and carrying a gun detachment from his old anti-tank battery.Robin, towed by the Halifax of the then FIO Jerry Norman, was given a perfect tow and approach for release. The HT cables and the bridge superstructure were avoided but the glider’s wheels just caught the lip of the canal bank with disastrous results. Both pilots were ejected through the perspex and very sadly the gun detachment took no part in the battle for the bridge.

Bob Croot and G Squadron at Fairford were the next lucky recipients of Robins services. He was promoted to Flight Commander and set about preparing 24 Flight for the next and hopefully better planned operation. With the help of Bob Palmer, Joe Telfer, Charlie Harper, George Dunn and a prime collection of ﬁghting men, the flight was brought to a ﬁne pitch of readiness only to be told that it was not needed on D-Day.

Whilst awaiting D-Day, to relieve the monotony of Fairford station life, Robin had thumbed a lift in the second pilot’s seat of Sqdn/Ldr Gibb’s Stirling on Operation Percy ll, dropping supplies to the Maquis in southern France. The operation was carried out in brilliant moonlight at a height from which plainly could be seen ﬁgures waving and picking up the containers, a most gratifying sight. Unfortunately a number of glider pilots were lost on these operations and a clampdown was imposed on such joy riding.

Luckily with Freddie Foster as second pilot and a motorcycle for transport, time passed smoothly until September 17th, 1944. Third combination off on that Sunday morning Robin and Freddie with a load of Div HQ had no problems and landed safely on the correct LZ. The exploits of 24 Flight ’G’ Squadron in the battle around the Hartenstein Hotel have been very fully covered by Dusty Miller in his excellent book "Nothing is Impossible". The conversation between the tug pilot, Bill Gardiner and Robin in the glider on the tow to Arnhem was fully reported in the Daily Express of September 18th, 1944 by William Troughton who ﬂew in the Stirling tug with Bill Gardiner.

One incident during the Market Garden operation which remains most clearly in Robin's mind occurred on the night of the withdrawal over the river. Having always been assured that glider pilots would be the ﬁrst to be evacuated on any operation, Robin and his gallant ﬂight were instructed to hold secure the junction of forest paths below the Hartenstein until all those leaving had passed through. The ﬂight was to stay in position for any stragglers until midnight By 22.30 his all had gone very quiet and there was much biting of nails waiting for the Witching hour. When the ﬂight did move off led by the Flight Commander holding a compass pointing directly to the river, they encountered a column of ﬁgures which loomed out of the darkness proceeding in the opposite direction. Thankfully they proved to be friendly but were adamant that they and not 24 Flight were heading for the river. Robin however maintained his compass course and the ﬂight arrived safely at the river in time to catch one of the Canadian sapper's boats to the far shore.

The Squadron moved to Dunmow and Robin was selected to go out to India as a Squadron Commander with Bob Croot in charge of a new Wing to be formed. However, this promotion was not to be, Robin landed up in hospital again with recurrent jaundice and thus was spared the fateful crash in the Pyrennes. He was taken off operational ﬂying but remained with 'G’ Squadron at Dunmow. In the early summer of 1945 there came a very welcome break in the shape of being despatched to Hengistbury Head near Christchurch to be in charge of a holiday/training camp for the Regiment. At the end of a very pleasant summer season with wife and small daughter staying nearby, he returned to Finmere.

In May 1946 the War Ofﬁce ﬁnally decided that Robin's services were no longer required and he was demobbed in the rank of Major. He resumed his interrupted career as a chartered quantity surveyor and in 1947 entered into partnership, practicing in London’s West End. Robin retired in 1980 and lived in Midhurst in the county of Sussex.

Excerpts taken from A Portrait of a Pilot - The Eagle Magazine 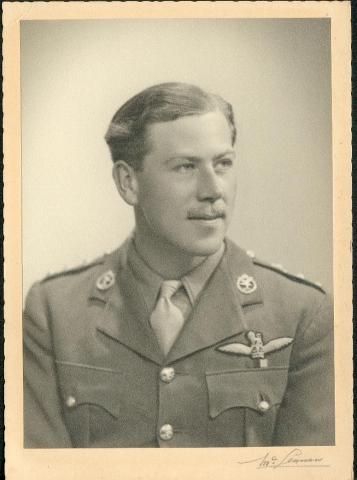