Private Robert Victor Heyden was the son of Alfred John and Muriel May Heyden, of South Croydon, Surrey.

He was enlisted into The East Surrey Regiment  and volunteered for airborne forces in 1943.

Pte Heyden qualified as a military parachutist on course 91, which ran at RAF Ringway in November 1943, and was posted to the 8th (Midlands) Parachute Battalion.

He took part in the Normandy campaign, during Op Overlord, as a member of Lt Fry's 3 Platoon in A Company.

On 16 June elements of the battalion, including A Company, repulsed a major attack on their defensive positions by German forces. The battle lasted for eight hours and resulted in six gallantry awards. Pte Heyden was fatally injured in the battle and died of his wounds.

The three sections of No 3 Platoon A Company, 8th Para Bn, crossed the Normandy coast in separate Dakota aircraft each dropping a clutch of fifty pounders to suggest that they were on a bombing mis 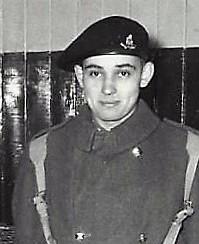