Robert Scott was the son of Alexander and Margaret Scott, of Dundee. He enlisted into Royal Army Medical Corps.

After successfully completing his parachute training, Sergeant Scott posted to the 13th (Lancashire) Parachute Battalion. Corporal Scott was awarded the Military Medal for gallant and distinguished conduct on Operation Overlord, he showed great courage and total disregard for his own safety to help the wounded, even when wounded himself. His award was announced in The London Gazette on 29 March 1945. T

His citation for his military medal reads:

'Throughout the operations in which the 13th Battalion The Parachute Regiment have been engaged, the exploits of Corporal Scott, RAMC, attached to this battalion, have been a constant source of inspiration and encouragement to the men of the battalion. He has never been known to fail to render first aid to any man who has been wounded, no matter what the fire, and he has never been known to consider his own safety for one moment. At Pont L’Évêque he was giving first aid to a wounded Corporal, when a German machine gun wounded him in the fingers while he was dressing the Corporal’s wounds. He took not the slightest notice but continued to dress his wounds, after which he carried him to safety. Wherever wounded were, no matter what the fire, there was always Corporal Scott to be found. Several times wounded were encouraged just by being told by their comrades, “It’s all right Corporal Scott is here”. No example has at any time been finer and there could not possibly have been a greater courage displayed than that constantly shown by Corporal Scott.'

“When the battalion moved to Le Mesnil, I first met Corporal (later Sergeant) Scott, one of my RAMC men that I had not yet caught up with, a wonderful man who became a legend in the battalion. I was visiting one of the forward companies and was immediately aware that everyone was riveted by something happening ahead in ‘no mans land’. Then sweating profusely, grinning broadly, in came Scott carrying over his shoulder one of our men. He spotted me and laid the man, who had been out on patrol, at my feet but, alas, he was already dead from a bullet wound that had sliced open his rib cage.’

Sgt Scott MM went on to see active service in the Ardennes and again showed great bravery to tend the wounded.

“The tank commanders were courageous and resourceful with active groups of panzer grenadiers clearly experienced in street fighting. Our men proved equal to this but there were many casualties. At one stage there were 5 badly wounded men in the cellar of a house about 30 yards in front of the tank. We knew of this but saw no way of getting them out. At this stage Sergeant Scott came to me and asked if he could take an ambulance up to the house and remove the wounded men, and the Padre said he would like to go along as well. If I had known precisely what was planned I might have stopped such lunacy but off they went.”

“We couldn’t believe our eyes, for 10 minutes later we saw an ambulance coming up the road. We stopped it outside the front door; it was Sgt Scott, of the medics and with him was Padre Foy, a man loved and respected throughout the unit. Scott was one of the bravest men I ever met.”

“The ambulance heavily laden lumbered back down the main street, past my RAP and back to the 225 Field Ambulance 2 miles away. Two men were the heroes of the hour - Sergeant Scott (with Padre Foy in strong support) and of course, the enemy tank commander... What men! It is said that later (but it may be legend) when the tank commander showed himself through the hatch to direct his men once too often, and was shot, some of our men shed tears at this. Such is war and the strange bonding it can create between the men of both sides!”

Sgt Scot MM then went on to serve in the Rhine Crossing before he went on the Advance to the Baltic.

“We advanced towards a large Luftwaffe airfield called Wunstorf which was obviously still active and certainly defended by the Germans. Small arms fire greeted us as we got nearer and there were some casualties in the forward platoons. I could see through my binoculars one casualty out in the open but obviously still alive as he was trying to crawl into some cover. Suddenly we saw one of our medics, Sgt Scott who had been at Belsen 2 days before, charge across the open space on a motorcycle to go to the wounded man’s help. He didn’t make it as he was brought down by a burst of machine gun fire from the airfield defences and must have died instantly.”

“The Company advanced in extended order cross the open stretches of the airfield with those dreaded 4 barrelled 20mm. flak guns firing directly at us, but we held out line and when close enough charged with fixed bayonets. They didn’t like that and they just packed in. We look a lot of prisoners but lost another very brave man when the Medic, Sergeant Scott was killed.”

“German Hitler youth, between 15 and 17 years old, manning multiple barrelled 20mm, rapid fire, anti-aircraft guns, attempted a last ditch defence and wounded several of our men. My beloved Sgt. Scott fearless as ever, rode up to them on a light motor cycle with a Red Cross clearly displayed but regardless of this the Hitler youth opened up and Sgt Scott died instantly. “When I reached him I found his head was completely shattered. A wounded man he had gone to help was lying close by with a severe leg wound. He looked at me with a strange intensity and said in a low, urgent voice, “Doc, please remove Sergeant Scott’s brains from my tunic.” Aghast, with great care I cupped my hands and lifted the still warm tissue across to Sgt Scott’s body. It seemed as though I was holding the very essence of this man in my hands. A man admired and respected by all, who had been awarded the Military Medal for his courage in repeatedly retrieving so many wounded from dangerous positions whether they were British or Germans, and always an inspiration by his cheerful acceptance of arduous conditions. We had been comrades through many formidable times together and his loss left a huge void, To this day many memories come back to me but none so vivid as this. Such memories do not now unduly distress me but I allow them to float through my thoughts rather than to attempt to suppress them. They happened and I cannot change them. Such is the cruelty of war! “This was an exceptional and distressing episode committed by youths thoroughly imbued with the Nazi creed and no doubt who felt they were defending their country. The Hitler Youth were well known for their atrocious behaviour.” 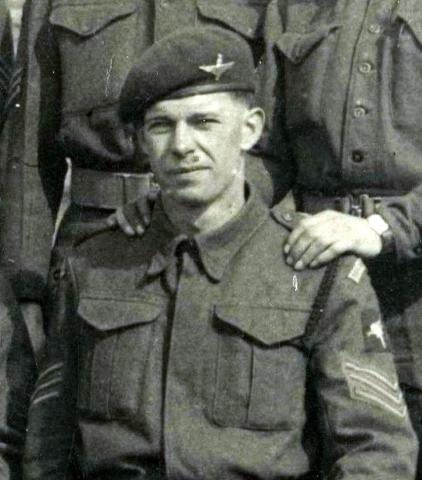