Robert August Reiber enlisted into the 1st Battalion, The Tyneside Scottish, The Black Watch (Royal Highland Regiment) before volunteering for airborne forces in 1943.

He qualified as a military parachutist on course 49 which ran at RAF Ringway from 1 to 18 February 1943. The course instructors’ notes read ‘Pte Reiber: Worked hard, showed no hesitation, makes good team man.’

By the time he deployed on Op Dragoon he had been promoted to Corporal. Paratroops jumping from his aircraft were scattered 10 miles north of the drop zone, between Bargemon and Fayence. He landed at about 5.00 AM on 15 August 1944.

Later promoted to Sergeant, Robert Reiber was awarded a Military Medal for actions in Greece during Op Manna, which was announced in the London Gazette on 10 May 1945.

He was demobilised and transferred to the Army Reserve in August 1946.

Robert Reiber, maintained a number of interests and hobbies, including singing, amateur dramatics, and ballroom dancing. He died on 30 August 2012. 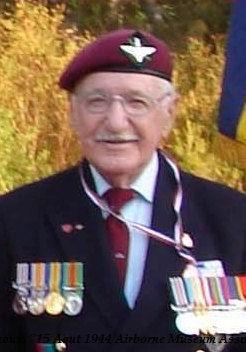