Robert Priestley enlisted into The King's Own Yorkshire Light Infantry (KOYLI) before volunteering for airborne forces in 1942.

Private Priestley undertook Parachute Course 35, this course commenced preparatory ground training under RAF instructors at Hardwick on Monday 19 October. The intake consisted of 3 officers and 74 other ranks of the Air Landing Brigade for a short course and 2 officers and 193 other ranks of the Parachute Brigade for the long course. The pupils moved from to RAF Ringway on Thursday 29 October and the course was completed by 7 November 1942. The full period for preparatory ground training at Hardwick and parachuting at RAF Ringway was therefore 19 Days. There were two fatalities on course 35, these occurred within an hour of each other during the balloon jumps. In view of the fatal accidents RAF instructors jumped more frequently than normal. Flight Lieutenant Agate was commended for going up in the balloon to 1000ft and a giving demonstration jump in front of a large number of troops immediately after the fatal accidents.

Pte Priestley was posted to 2 Platoon, A Company, The 2nd Parachute Battalion and was sent as a reinforcement on Operation Torch to North Africa. It is likely that he took part in the attempt to secure the Primosole Bridge in Sicily on 13 July 1943. He went on to serve in Italy.

On 17 September 1944 Corporal Priestley jumped into Arnhem on Operation Market Garden and was later taken a Prisoner of War. 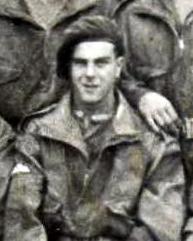