Private Robert "Bobby" MacGregor served with 13th (South Lancs) Parachute Battalion in Winter 1944-5. A Scotsman he joined the Parachute Regiment from the Royal Artillery, persuaded to join Airborne Forces by the extra pay and kudos.

Bobby MacGregor was part of the sudden deployment of the 6th Airborne Division to the Ardennes region of Holland before Christmas 1944 to halt the German counter-offensive. He took part in the Battle of Bure which took place in early January 1945.

By the 2 January 1945, the Battalions orders became clear. They were to capture the bridge at Grupont, relieving the village of Bure as they progressed. Their objective would stall the German counter-attack and release limited American resources to continue their fight in the Bastogne region.

On the morning of 3 January 1945, 13th Battalion made their way to the start line of the Operation, in a copse of snow covered trees, some 400 yards from the village of Bure. Allied intelligence underestimated the German defences in the village, a formidable force consisting of SS Panzers and SS Infantry. The 13th Battalion offensive soon came under artillery fire, with enemy machine guns shaking the snow from the trees where the Battalion had formed.

Then the order to advance came, so with bravado, fear and uncertainty, the first men of the 13th began their attack on the village. The 400 yards to the village - a distance which might have seemed a lot further for the more inexperienced as the men edged forwards through snow, smoke and the noise of Battle to the relative "safety" of the houses on the outskirts of the village.

The experienced officers in charge responded well to the challenging conditions. Despite hampered communications and fierce combat, the 13th slowly progressed through the village.

As the Battle progressed, Pte Macgregor and several others found themselves cut off on the ground floor of a house in the village. Their positioned worsened further when they observed a German Tiger Tank crawling towards the house they occupied, sending tank shells into neighhbouring properties as it moved with devastating power. Detached from their company, the party had little option but to surrender one by one before the Tiger Tank destroyed their last refuge.

They were taken as Prisoners of War, marched behind into more secure German positions to a makeshift prison compound enclosed with hastily assembled barbed wire fencing. On the first cold night spent in as prisoners, the party noticed they were only watched by one Guard as German resources were themselves clearly stretched by the Battle.

Later the following day, more men joined the camp, with numbers at approximately 40. All were British soldiers, although not all Airborne soldiers. Despite the increased number their guard detail remained at just one for the second night.

One of the new prisoners had smuggled a small pistol into the camp. When the guard approached, the prisoner managed to shot him dead. Now effectively unguarded he escaped, followed by around twenty other prisoners, including Pte MacGregor. Throughout the night, the escapees ran through the snow, splitting into smaller groups to reduce risk of capture.

Eventually, MacGregor and his group arrived at a farmhouse and asked for assistance, explaining as best they could their situation. They were welcomed into the farmhouse and given some food. Some while later, the noise of a vehicle was heard outside. Looking from a window, it was noticed that it was American Troops. The farmhouse was in the American Sector and the farmer had sent a message to the local authorities.

The escapees were taken to a local American base, interrogated briefly (to be satisfied they were not German spies dressed in Allied uniforms!), before allowing their return to the British sector.

From information kindly supplied by www.thewarcabinet.com 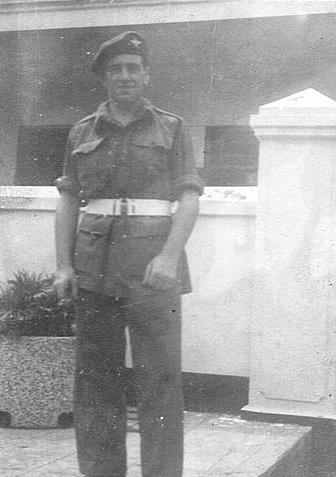